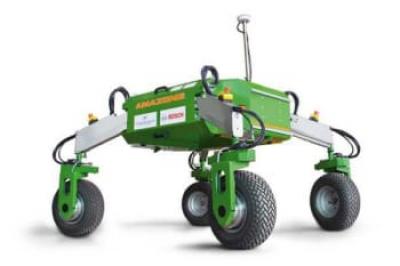 The Farming Robots Market Projected to Reach $5.7 Billion by 2024 Brandon Marshall has a look at this market on machinery.com.  He writes, Transparency Market Research (TMR), has released a report, “Agriculture Robots Market - Global Industry Analysis, Size, Share, Growth, Trends and Forecast 2016 – 2024,” predicting a sizeable increase in demand for agriculture robots within the decade.

The report estimates that the agricultural robotics industry has generated USD $1.01 billion in revenue globally as of 2016. Going forward, TMR suggest that revenue for this industry will rise to approximately $5.7 billion by the end of 2024. This estimate is based upon a projected compound annual growth rate (CAGR) of 24.1 percent over the forecast period.

According to one TMR analyst, the migration of populations away from traditionally rural areas toward densely populated cities and suburbs has increased the demand for food in these regions. In addition, the population drain from farming communities–combined with the repurposing of former farmland for industry and residences–is driving the need for precision farming. That’s where robots come in.

Opportunities for Innovation in Agriculture

Beginning with the debut of the Rotolactor (a large, rotating, milking machine) at the 1939 World’s Fair and continuing today, the majority of agriculture robots have been designed to perform one specific task. TMR’s research report categorizes robotic farming systems accordingly:

The installation and operational costs of these non-integrated, task-specific systems has, unfortunately, slowed the adoption of automated processes on many farms. Additionally, legal and regulatory concerns continue to pose a challenge for agriculture innovators.

According to TMR analyst, innovations in agriculture technology are likely to take place in the area of wireless telemetry; including sensors used to monitor crop health or the status of machines operating out of view.

The research report found North America currently leading the industry in terms of market share, though strong growth within Asia is likely to continue. Some prominent players within North America include: PrecisionHawk, Inc., Clearpath Robotics, and Harvest Automations, Inc.

SenseFly SA and Naio Technologies dominate in Europe, while Shibuya Seiki is a leading player within the Asia-Pacific region.

TMR has also suggested that competition in the farming robots market will increase around the globe as start-ups continue to push innovation.

The full report is available from Transparency Market Research.

Ed's Note:No mention of technology out of New Zealand.  Updates in this arera welcomed.

More in this category: « Dairy manure converted to renewable diesel via gasification. White butter is taking off in the Middle East »
back to top
Mar 21, 2018