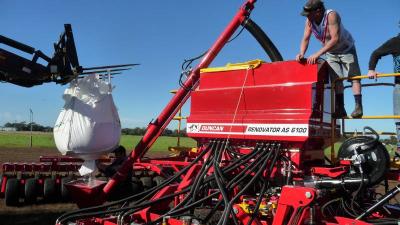 Mr Pratt is owner of Emu Ridge Ag Contracting based from Penola, fifty kilometres north of Mount Gambier. He primarily concentrates his business on hay baling and pasture renovation.

"“I feel that farmers need to get more out of the land they have got. With beef prices being on a high, it’s a good time for farmers to improve their pastures.”" - Nick Pratt

The business purchased the new 6.1m wide AS6100 drill in April. He was previously using a 26-row another brand of seed drill with six-inch spacings as his main drill.

Mr Pratt said that a trip to New Zealand in 1994 is what tipped the balance in favour of the Duncan drill.

“I feel that farmers in New Zealand are some of the best at growing grass in the world.

“The Duncan is a true pasture renovation machine and that’s the line we are going down with our contracting” he said.

Duncan Ag is a family owned business, with all manufacturing taking place in New Zealand.The 6.1m wide AS6100 Duncan drill

Mr Pratt said that one of the features of the Duncan drill is that it is a simple machine with few wearing parts.

“It has the coulters on the front, with a Baker boot and rubber-tyre roller on the back. There are L-shaped finger tines for seed incorporation” he said.

Previous drills used by Mr Pratt did not have coulters, but he made the move as he thought they would make it easier to handle the trash.

The finger tines also make a difference to establishment.

“The fingers tines weren’t on our old machine but when the seed falls out the back on the Duncan it gets incorporated more” he said.

Mr Pratt and his son James have been using their new Duncan drill since the start of May.

They have planted approximately 500 hectares of pasture this season with the drill.

The Pratts have followed up on the progress of the early paddocks sown for their clients and have been happy with the result.

“I feel that farmers need to get more out of the land they have got. With beef prices being on a high, it’s a good time for farmers to improve their pastures.”| A Farmonline release  ||August 2,  2017   \\\