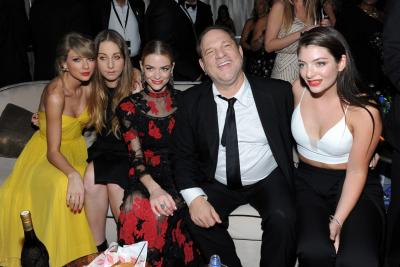 Many believe that New Zealand’s Hollywood suburb Miramar, is in fact Miramax

Lugubrious, ponderous, quick tempered, and impulsive, it was Mr Weinstein who backed the film that launched the third, and ultimately successful wave of New Zealand film making.

This was The Piano with its all -star global cast and subsequent global take up.

So successful was it that Mr Weinstein was to use the piano theme again, in Beautiful Girls.

Then Mr Weinstein went on back New Zealand’s Heavenly Creatures.

Then he gave the initial show of support to the most spectacular product series of New Zealand cinematography in the form of the Tolkien saga.

The one man hit-factory’s New Zealand touch was so accurate in the entertainment industry here that many believed that that the locational hub of the New Zealand industry was actually Miramax instead of being in fact Miramar.

Mr Weinstein’s (pictured) touch is often considered to be behind the comet-like careers of others with New Zealand backgrounds, notably that of Russell Crowe of Master and Commander fame.

New Zealand and Mr Weinstein were lucky enough to collide at the very height of the Miramax golden touch at the cusp of the last century and this one.

Subsequently Miramax went through a series of corporate revolving doors that began to sap the company’s blend of intuitive show-picking along with the personalised business side of the equation needed to sustain it.

Like a protagonist in one of his own films Mr Weinstein failed to foresee the imminence of his own demise.

Sycophants encouraged him in his foolish belief that he was bigger than the game.

Then he got himself on the wrong side of history.

He was oblivious for example to the screamingly obvious fact that as a highly visible, even ghoulish , personification of the big-donor Democratic- Clintonesque epoch, his once acquiescent protectors were melting away.

It was now that the East Coast media, stung by accusation after accusation to the effect that they believed that only Republicans were capable of doing bad things, sought to correct the impression that it had given.

It went looking for a counterbalancing Democratic scalp to put up on its masthead spear.

In terms of notoriety, vulgarity, and sheer name recognition there were none bigger than Harvey Weinstein’s.

| From the This email address is being protected from spambots. You need JavaScript enabled to view it.  ||  Tuesday 10 October 2017   |||