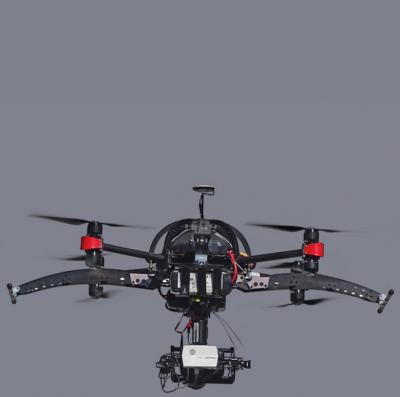 Nov 28, 2017  -  Kiwi-owned and operated VigilAir has launched its semi-autonomous aerial surveillance drone technology onto the global market – a product that has the potential to change the face of security worldwide. “The VigilAir software product is one of the first of its kind and will undoubtedly disrupt the security industry. Simply put, our software will enable drones to be the first-response security guards of the future,” says director of VigilAir Limited, Mike Marr.

Mr Marr’s company has spent some years pioneering the use of drones with new technology for security purposes, including self-funding their own research and development, and it’s all run out of their Auckland premises.

New Zealand has been at the forefront of drone/UAV (Unmanned Aerial Vehicles) regulation. VigilAir continues to work closely with the Civil Aviation Authority (CAA) to develop the equipment, systems, and processes to provide a safe and effective service.

The VigilAir solution will be provided as a full-service solution, with drone enclosure, installation and full ongoing support provided.

The product and service operate under a current Civil Aviation Authority certification, with work underway to rapidly expand the operating parameters. International patents are also well underway for the software that can dispatch camera-equipped drones to investigate any external security event.

VigilAir is a SaaS product that integrates drones into existing electronic security systems. It’s suited to large outdoor sites such as retail and industrial parks, hospitals, university campuses, schools, ports, prisons, and town centres that are at risk of burglary, vandalism or security breaches. A security drone will also be an effective deterrent.

When not flying, the drone sits in an enclosure - dubbed a nest - located on a business site. When alerted by an alarm sensor trigger, it will be dispatched to fly over the site to investigate, recording and live-streaming high definition video footage to whoever’s monitoring the action.

The drone may include a thermal or infra-red camera, and bright LED floodlights to illuminate any intruder and record the scene. The hovering drone may sound a siren or even talk to the intruder using a two-way communications system.

Before leaving the nest, the VigilAir SaaS system checks the weather data, then the drone flies a pre-determined flight route that’s geo-fenced to preserve neighbours’ privacy and comply with flight regulations.

A future release will allow the drone to be further manoeuvred to follow any fleeing suspects, capturing images of them and their vehicle license plate number as they evade. The drone then returns to its nest to recharge.

“After considerable R&D, innovation and years of trials, not to mention processing technology and software patents, to now be able to unleash the product onto the international market is really exciting.

“VigilAir’s system is all about delivering faster, safer, and more cost-effective security for organisations or businesses with large sites and security installations.”

Mr Marr says to be able to fly a rapid response drone literally directly into a crime, and to record and transmit all that’s happening, has huge advantages over a traditional on-the-ground security response.

“And we’ve designed it to be user-friendly. Security guards, whether on site or operating remotely, will be able to use the system and it’s one that can already ‘talk’ to 99% of all existing electronic security systems.

“As you can imagine this is all a lot safer than dispatching a guard on foot to check out a security problem. Drones will help catch perpetrators as everything’s recorded which is gold for any eventual prosecutions. And importantly, the ongoing cost will be lighter on operational budgets.”

Mr Marr says VigilAir has the potential to make $400m in annualised revenue. This is largely because the fully integrated semi-autonomous system is a world-leader and its ease of operation and effectiveness has wide appeal for any organisation needing to protect its assets or people.

Further, he believes harnessing drone technology for security purposes was somewhat inevitable for a company that has been at the forefront of CCTV and wireless security technology in New Zealand.

VigilAir’s interest in drones however doesn’t stop at security. Mr Marr says while their use for aerial photography is well established, considerable potential remains in core New Zealand sectors like agriculture, construction and forestry.

“Our drones have assisted the police in search and rescue operations in hard-to-reach terrain like cliffs and crevasses. And we’ve done all sorts of work from inspecting the Auckland Harbour Bridge to looking for leaks on the roofs of central city buildings.”

As well as inspecting infrastructure and assets, smart drone technology is used for Infrared imagery to track heat-loss and to create 3D models that are dimensionally correct to a few centimetres.

VigilAir was invented and developed by ASG Technologies - a technology incubator established three years ago by TPT Group. Over 150 people are employed at TPT Group which has a stable of security businesses - the best known in New Zealand being Advanced Security.

Based at East Tamaki, Mr Marr is the founder of TPT Group and remains its CEO. He is also directly heading VigilAir which was founded last year to commercialise ASG’s drone control software.

Mr Marr says the experienced VigilAir team, led by Andy Grant an ex Warfare Officer from the Navy, includes software and mechatronic engineers and a commercial pilot. The team remains focussed on the ongoing development of the VigilAir capability and delivering world-leading future-focused security technology.

“To now launch a semi-autonomous ‘eye in the sky’ solution, incorporating an on-site drone with cloud-based SaaS software, is a long way from how we initially viewed drones - as flying CCTV cameras to support the fixed ones.”

He says with the world continually urbanising, ongoing security technology innovation will help with many governments’ aspirations to develop safer cities.

TPT Group is also advancing robotic technology with the intent of one day launching fully autonomous ‘foot patrol’ robots to work in conjunction with its security drones.

More in this category: « Spend your Summer with RocketLab AirMap Partners with Airways New Zealand to Trial the Country's First Drone Traffic Management System »
back to top
Aug 16, 2018