The unbelievable amount of parts in A380 Airbuses

It seems like a silly thing to say, but we really had no idea about the sheer amount of blood, sweat and tears that go into creating an Airbus.  We get how big they are, but who would’ve thought they are made of 4 million separate pieces.

As well as the astounding number of parts, the man hours alone are enough to make your head spin.

The construction takes place in four different cities, with every part then shipped, flown and driven to Toulouse for the final assembly.

Thanks to a recent article from CNN, we now have a little mroe understanding of how the mega machines are put together.

The Airbus wingsets are made in Broughton Wales, the rear fuselage and vertical tail fin are put together in Hamburg, Germany.

Saint-Nazaire in France takes care of the forward and center fuselage, while Cadiz in Spain constructs the horizontal tailplane.

Then all parts are sent to the Jean-Luc Lagardere plant at the Toulouse-Blagnac Airport.

According to the article, the Airbus A380 is comprised of four million individual parts from 1,500 different companies from 30 countries globally.

Speaking to CNN, Arnaud Cazeneuve, oversize surface transportation manager for Airbus said: “One A380, to me, is six components — three fuselage sections, two wings, and the horizontal tailplane.”

Surprisingly, throughout the whole process, Cazeneuvete said: “there is no crane activity needed.”

“Each production plant puts the sections on the transport jig, and a special multi-purpose vehicle goes under the jig to move it.”

Check out the map of construction below: 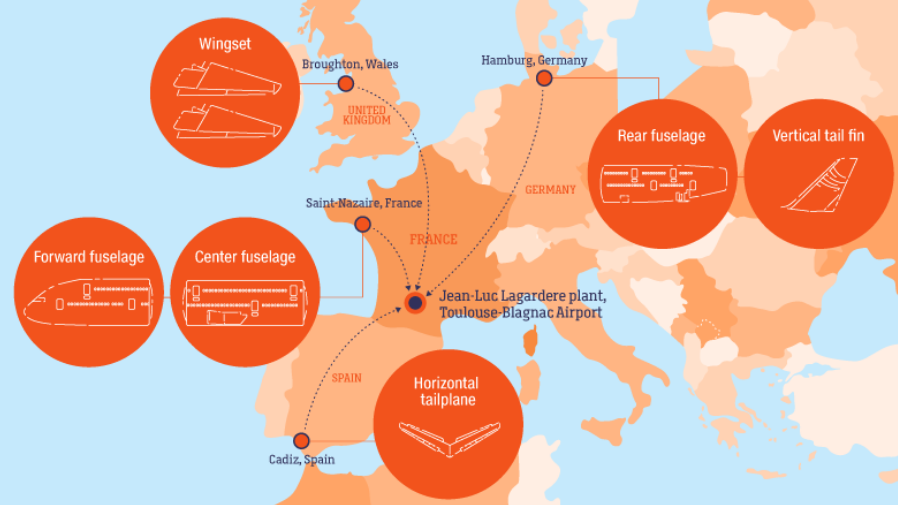 More in this category: « SIA to 'de-link' Canberra and fly Wellington - Melbourne Qantas cuts first class on major route »
back to top
May 04, 2018