Three wearables for your factory 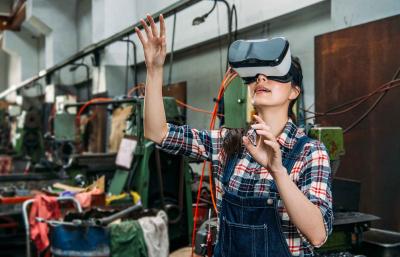 According to Statista, there were 453 million connected wearable devices worldwide in 2018, a figure that is predicted to increase to 593 million this year. While, unsurprisingly, the market is currently dominated by smart watches, you may be surprised at the benefits wearables can bring to a manufacturing facility. Here, Jonathan Wilkins, marketing director of obsolete equipment specialist, EU Automation explains how wearables could transform your factory.

Smart watches are not the only wearable tech. The sector has rapidly expanded and now includes radiation-blocking underwear, smart shoes and emotion-sensing bracelets. As well as weird and wonderful applications, wearable tech is becoming a staple factory technology, by offering safety and productivity benefits.Smaller sensors and technology that improves battery life are benefitting consumers – like athletes – who can be seen covered in wearables to monitor performance. This, combined with increased connectivity, is what has enabled industrial wearable tech to take off. In the industrial environment, wearables could include hats, gloves, clothing and bracelets.According to the International Organisation for Standardisation (ISO), over 7,600 people die every day from work related accidents or diseases ─ 2.78 million a year. This is why the organisation is developing ISO 45001, a framework to improve employee safety. Wearable technology could enable organisations to meet this standard more easily.Avoiding sprains and strainsOne company, hot on the trend is Kinetic. The company is tackling the common work-related injuries, sprains or strains, previously prevented by avoiding bending and reaching. The company produces the Kinetic Reflex, a device that can be attached to a belt to monitor posture. If bending, twisting or reaching is detected, it will notify the worker. A four-week pilot showed a 96 per cent reduction in sprain and strain risk – meaning this device could be one to watch out for.Hazardous areasPersonal protective equipment (PPE) can be connected to the internet to monitor worker’s interactions with their environments. In an environment that includes humans and robots, wearable tech equipped with GPS sensors can help to avoid collisions and alert workers when entering hazardous areas.Worker safety can also be improved using connected gas detection equipment, which allows plant managers or safety managers to track staff’s exposure to toxic substances, radiation or low oxygen conditions. ComfortAs well as worker safety, worker comfort can be improved with wearable technology. Take the Chairless Chair, for example, developed by Noonee, this unusual wearable allows its user to sit down anywhere. This can be worn while walking and standing, moving into chair position on command. Suited to the individuals shape and size, it promotes good posture, improving comfort and well-being. Wearable technology can improve worker safety and comfort — both of which can contribute to productivity. It’s no longer just smart watches and fitness trackers — wearable tech is set to become a factory essential.