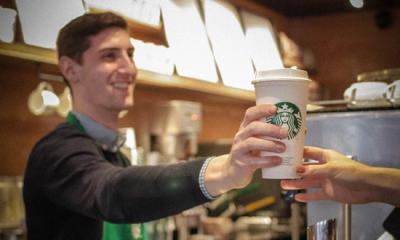 Starbucks is committing $10m to develop a fully recyclable and compostable coffee cup.  The coffee giant said its NextGen Cup Challenge initiative, in partnership with Closed Loop Partners’ Center for the Circular Economy, will provide grants to inventors who are working towards a new cup technology.

The company has previously made a pledge – a decade ago – to introduce 100% recyclable coffee cups, and has faced pressure from environmental groups to honour this commitment.

This announcement is seen by some groups as a rehash of the previous pledge – albeit with a firm commitment to fund the development of the required technology.

The inside is coated with a thin liner designed to meet quality and safety standards.

The company’s research and development team is testing a new bio-liner, made partially from plant-based material.

In a statement, Starbucks said: “No one is satisfied with the incremental industry progress made to date, it’s just not moving fast enough. So today, we are declaring a moon shot for sustainability to work together as an industry to bring a fully recyclable and compostable cup to the market, with a three-year ambition.”

Currently there are two companies that claim their technologies provide the solution to the question of coffee cup recycling.

The Frugal Cup from Frugalpac is marketed as being made from recycled cardboard that ‘can be processed by any UK paper recycling facility’. But it is understood there is a requirement for investment in certain equipment.

The other company – Smart Planet Technologies – claims its reCUP is the first commercially-available paper cup engineered for recycling through traditional paper recycling systems.

Will Lorenzi, president of Smart Planet Technologies, said the company re-engineered the cup to be fully functional and fully processable with traditional recycling systems by changing the coating formulation, and has recently been modified to pass EU specifications tests.

He said it was important that the Starbucks NextGen Cup Challenge recognised that the traditional polycoated paper cup is ‘unacceptable’.

The UK government’s response to the Environmental Audit Committee (EAC) Report on paper cups specifically referenced a recyclable cup currently available on the market – which an industry insider confirmed to Packaging News was reference to the reCUP.

More in this category: « Australasian manufacturing is going to be great again Stiles announces new design and names for Homag equipment »
back to top
Mar 12, 2018