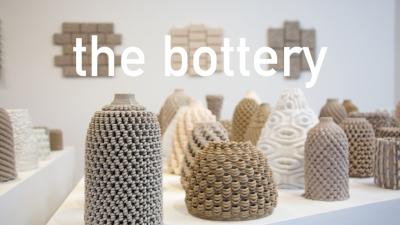 Coupling pottery ideas that have been around for thousands of years with 3D printing allows Rael and his team at the PrintFARM (print Facility for Architecture, Research and Materials) at Cal Berkeley to create new textures and shapes. Rael has partnered with Virginia San Fratello from San Jose State University to build a research station in Oakland that has a mission of helping the world to “explore the creative possibilities of robotic pottery”.

The Bottery is running a Kickstarter campaign to fund the first iteration of its workshop. The innovation that Rael, San Fratello and their group Emerging Objects brings comes from new materials and new sizes of 3D printing. Their portfolio of projects includes material ranging from acrylic to cement to sand to wood. My favorite project is the Utah Tea Set created in 2015 and built out of actual tea.

Working with machine builder 3D Potter the group already has several machines commercially available. The Micro 8 can be purchased through the campaign and boasts a 10x10x12 inch build envelope. The XLS-1 is the largest current machine and builds in a staggering 72 inch diameter, 45 inch high build envelope. The extruder of the XLS-1 holds 3600 milliLiters of clay. Software called Potterware allows the user to create their own pottery projects, as well as controlling surface finish and detail work.

The Bottery project is great because of the idea that everyone should be 3D printing, and everyone should be trying to print out of new materials creating new objects. I first became aware of Rael and San Fratello in 2016 when their 3D printed house video was released and it’s encouraging to see that they’re still building projects and trying to expand their scope. The campaign ends on June 15 and if successful the group will build the reward pieces and ship the 3D printers later this year.