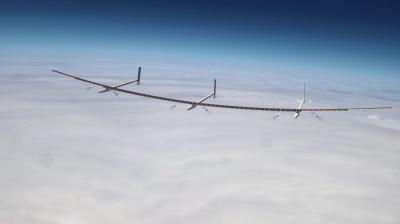 HAPS are designed to occupy that sweet spot between conventional UAVs and traditional satellites. In theory, these completely autonomous aircraft will be able to fly for an indefinite period of time, powered by solar energy and traveling at altitudes of about 20 km (12 mi), above clouds, jet streams and winds in general, and commercial airliners.Odysseus can also be used for long-term surveillance projects

Aurora Flight Sciences first revealed its intention to produce a HAPS back in 2008 when the Odysseus was revealed as part of DARPA's Vulture program. Back then, Odysseus was presented in concept form, with a radical Z wing configuration.The original, unconventional design from 10 years ago

Now, a decade later the full-scale prototype has been unveiled, and the ambitiously odd Z-shaped design has been replaced with a more conventional shape, reminiscent of other HAPS in development.

The exact specifications of the craft are unclear at this stage, however Aurora claims Odysseus has, "a greater year-round global operating zone than any other vehicle in its class," and, "can carry a larger payload than any other aircraft in development or production in its class." To keep weight to a minimum, the aircraft mainly consists of carbon fiber trusses covered with a light UV-resistant film called Tedlar. Electricity generated by solar cells attached to the upper surfaces of the fuselage and wings power the aircraft's motors and is also stored in onboard batteries to keep it flying at night.Odysseus is just one of many HAPS in development

Odysseus, and other HAPS, can be utilized for a variety of tasks, from long-term climate and weather observations, to intelligence gathering and military applications. An interesting alternate use for these types of aircraft recently suggested is to assist in enhancing internet connectivity across areas of the globe currently out of range of current networks. Facebook was working on its own autonomous internet-beaming craft, called Aquila, for several years, but cancelled the program earlier this year to pursue partnerships with companies like Airbus.

"Odysseus offers persistence like no other solar aircraft of its kind, which is why it is such a capable and necessary platform for researchers," says Aurora President and CEO John Langford. "Odysseus will indeed change the world."

Of course, it will need to actually get into the sky and prove itself before it can change the world, and Odysseus' first flight is currently scheduled for the first half of 2019.

More in this category: « UK Tech Rocketship Awards take off in Australia and New Zealand
back to top
Oct 23, 2018