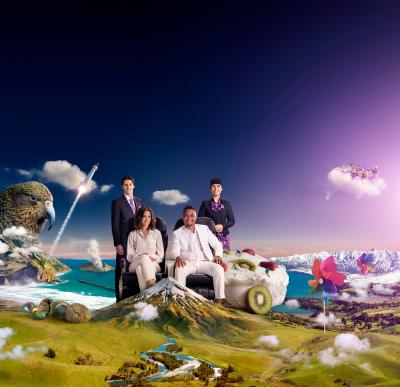 Air New Zealand has teamed up with American actors Katie Holmes and Cuba Gooding Jr. for its latest safety video A Fantastical Journey. The video is an Alice in Wonderland inspired adventure featuring a number of iconic locations throughout New Zealand including the Southern Alps, Otago – including Dunedin and the Moeraki Boulders, the Conway River in Canterbury, Wellington, Mt Taranaki, Waitomo Caves, Rotorua, Cathedral Cove in the Coromandel, Tolaga Bay north of Gisborne, White Island and the Auckland Harbour Bridge. New Zealand singer and songwriter Gin Wigmore has also recorded her own unique version of the song ‘My Little Corner of the World’ as the backing track for A Fantastical Journey. Katie Holmes says it’s been fun working alongside Cuba Gooding Jr. and the Air New Zealand crew to produce A Fantastical Journey. “I was really excited to be a part of this project – the safety video is creative, magical and funny. The scenery is also beautiful and makes me want to get down to New Zealand!” Cuba Gooding Jr. says he wanted to get involved in Air New Zealand’s latest safety video as he does a lot of travelling and loves the fun and different approach. “They make you laugh, smile and pay a little bit more attention. I’ve also enjoyed working with Katie Holmes and Kiwi artist Gin Wigmore – her voice is enchanting and soothing, exactly what you need for safety video!” Air New Zealand General Manager of Global Brand and Content Marketing Jodi Williams says A Fantastical Journey will put all eyes on New Zealand by showcasing some of the best the country has to offer. “With the help of Hollywood stars Katie Holmes and Cuba Gooding Jr. our latest safety video takes viewers on a journey taking in New Zealand’s stunning beauty, incredible culture, friendly people and amazing flora and fauna, while also sharing the airline’s key safety messages. “We’ve taken a different approach creatively with our latest safety video, working closely with our creative agency True, and Auckland-based production company Assembly throughout the process on the special effects to help take people on a magical tour of the country.” Gin Wigmore says she’s loved teaming up with Air New Zealand again after first working with the company on its first creative safety video the ‘Bare Essentials’ in 2009 which featured the hit ‘Under My Skin’ from her first album and then again more recently to record a version of the track ‘Tomorrow’ from the movie Annie for the airline’s Where To Next? campaign. “I feel privileged to record my own version of ‘My Little Corner of the World’ as it’s always a good challenge to re-produce a song, especially when it’s already so great. It’s also fantastic to see this track feature amongst some stunning New Zealand scenery, including my little corner of the world – the Coromandel.” Air New Zealand’s safety videos have collectively generated more than 108 million views online to date along with significant international media exposure including the likes of CNN, BBC and the Daily Mail. A Fantastical Journey will be rolled out across the airline’s fleet from today and can be viewed online here.

More in this category: « Emirates partners with BMW Group for its new fleet of Chauffeur-drive cars Air New Zealand increases capacity on Vancouver route »
back to top
Apr 05, 2018