Google Glass resurrected as a tool for hands-on workers 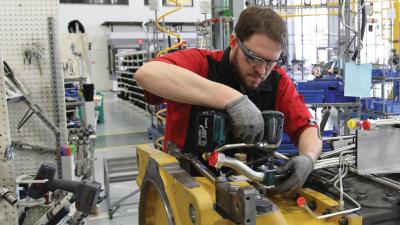 Following a two-year hiatus, the Google Glass augmented-reality headset has made a comeback, and is being targeted exclusively at businesses.

Google suspended sales of Glass at the start of 2015 in order to rethink its development.

But yesterday, the team behind the wearable made an announcement on Medium that after a two-year testing period, the headset – now named Glass Enterprise Edition – is being made available to all businesses.

This could see Glass become a competitor to other augmented-reality headsets already on the market, such as Microsoft's HoloLens, which is already favoured by the architecture and design industries.

"Glass, as you might remember, is a very small, lightweight wearable computer with a transparent display that brings information into your line of sight," project lead Jay Kothari wrote in the post.

"In a work setting, you can clip it onto glasses or industry frames like safety goggles so you don't have to switch focus between what you're doing with your hands and the content you need to see to do your job."

The updated design appears much the same as the original, but Kothari says the battery life is improved, and that it is lighter and more comfortable to wear for long periods of time.

Kothari also revealed that a two-year testing period had seen over 50 businesses across the manufacturing, logistics, field services and healthcare industries implement Glass into their working process.

Among them were DHL, Boeing and Volkswagen, which all reported positive feedback from workers – something that prompted Google to make it a widely available business tool.

"We first saw signs of Glass' potential for businesses in the Glass Explorer days," said Kothari. "We're looking forward to seeing more businesses give their workers a way to work faster and in a more focused way, hands-free."

Augmented-reality tools are already being used in some architecture and design practices. Greg Lynn, who used Microsoft HoloLens to design his contribution to the US Pavilion at the Venice Biennale in 2016, told Dezeen that the technology was set to "change the way architects work".

Glass has proved controversial since it was previewed in 2013. After it was unveiled, the UK government considered banning drivers from using the augmented reality eyewear behind the wheel of their car.

In March 2014, the headsets hit the headlines again when a woman was attacked in a San Francisco bar for wearing the device and the technology was accused of "killing" the city.