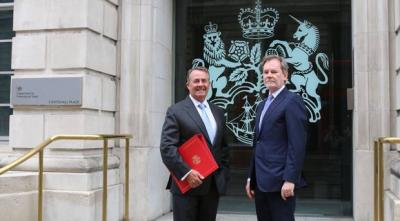 Britain has set out proposals to ensure that goods and services currently approved for sale across the UK and EU can continue to be traded after Brexit.

The plans published by Brexit Secretary David Davis were welcomed by business leaders as an improvement on EU proposals which would require separate regulatory processes on either side of the Channel from the day after UK withdrawal.

Mr Davis said the UK was now ready to begin a "formal dialogue" on elements of the future UK-EU trade relationship, such as customs.

But Brussels indicated it will continue to resist UK pressure to bring forward trade talks, insisting they must wait until after sufficient progress has been made on the divorce deal - something which one EU leader said could drag on beyond the autumn.

Slovenian Prime Minister Miro Cerar told The Guardian: "I think that the process will definitely take more time than we expected at the start of the negotiations.

"There are so many difficult topics on the table, difficult issues there, that one cannot expect all those issues will be solved according to the schedule made in the first place."

But Downing Street said it remained "confident" of making enough progress on the issues of citizens' rights, the financial settlement and borders for the European Council to give the green light to the second phase of Brexit negotiations when it meets in Brussels in October.

Mr Davis's new position paper comes ahead of the third round of formal negotiations in the Belgian capital next week, and is expected to be followed in the coming days by further documents on issues like post-Brexit judicial co-operation, dispute resolution and data protection.

His Department for Exiting the EU (DExEU) said the UK's proposals were designed to smooth the way to "the freest and most frictionless trade possible" under a new partnership with the EU.

But Liberal Democrat Brexit spokesman Tom Brake dismissed them as a "fantasy wishlist", adding: "Nothing would provide businesses and consumers with more certainty than staying in the single market and customs union.

"That is the option this Government should be pursuing if it was serious about protecting jobs and free trade."

Britain's proposals envisage all goods placed on the market before Brexit day continuing to be sold in the UK and EU without extra restrictions or requirements after withdrawal, and state that the same principle should apply to services relating to these goods.

Approvals granted for products like cars to be sold across the EU should remain valid, and arrangements should be made to ensure continued oversight of the safety and regulatory compliance of goods like medicines.

With EU exports to the UK totalling more than £250 billion in 2016, DExEU argued that this approach would avoid "unnecessary disruption" during the move to new long-term arrangements.

A "narrow" approach to goods like agricultural products or food would risk "significant legal uncertainty and potential disruption for businesses and consumers both in the UK and the EU", the paper warned.

A separate paper recommended a reciprocal agreement on continued confidentiality for official documents shared by Britain with its EU partners while it was a member state.

Mr Davis said the papers provide "certainty and confidence in the UK's status as an economic powerhouse after we have left the EU" and make clear that " our separation from the EU and future relationship are inextricably linked".

He added: "We have already begun to set out what we would like to see from a future relationship on issues such as customs and are ready to begin a formal dialogue on this and other issues."

European Commission spokesman Alexander Winterstein said the publication of position papers was " a positive step towards now really starting the process of negotiations".

But he said any early move to talks on trade would have to be agreed by the 27 remaining EU states, adding: "There is a very clear structure in place, set by the EU27, about how these talks should be sequenced and that is exactly what we think should be happening now.

"The important thing is to realise that the clock is ticking, that we have no time to lose and that we need to get on with it."

The CBI said the UK paper was a "significant improvement" on EU proposals which would create a "severe cliff-edge" for goods currently on the market.

But director of campaigns John Foster said the simplest way to reassure companies was f or the UK to "stay in the single market and a customs union until a comprehensive new deal is in force".

The director of EU affairs at manufacturers' trade body the EEF, Fergus McReynolds, said: "The Government's position is helpful as it reaffirms the concerns of the manufacturing sector to secure the continuity of goods and supply of services from 2019 onwards. Industry now wants to see this resolved as quickly as possible."

And Adam Marshall, director general of the British Chambers of Commerce (BCC), said: "Businesses here in the UK as well as on the continent will welcome the British Government's desire to maintain maximum continuity in the way goods are traded when the UK withdraws from the EU."

Ukip business spokesman Christopher Mills said: "As far as these proposals go, they appear sensible. Businesses on both sides of the Channel are looking towards the politicians to act responsibly. Today the UK has - over to you, Brussels."

"It is increasingly clear that the Government are publishing bland, non-committal papers as a smokescreen to mask their failure to make any meaningful progress on phase one's core negotiating issues - including citizens' rights.

"Instead of preparing the ground for failure, the Government should focus on reaching an early agreement to the first stage of talks and make an early commitment to establish strong transitional arrangements."

Published in Trade Talk
Tagged under