Total acquires Maersk Oil for $7.45 billion in a share and debt transaction 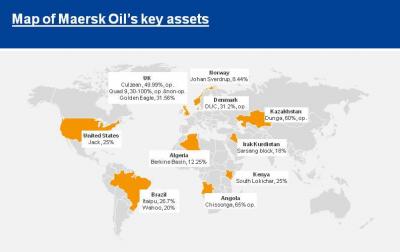 Paris – Total is pleased to announce that the Boards of Total and A.P. Møller – Mærsk have both approved the acquisition of 100% of the equity of the E&P company Maersk Oil & Gas A/S (Maersk Oil), a wholly owned subsidiary of A.P. Møller – Mærsk A/S, by Total in a share and debt transaction.

The proposed transaction is subject to the applicable legally required consultation and notification processes for employee representatives and to approvals by the relevant regulatory authorities. The transaction is expected to close in first quarter 2018 and has an effective date of 1st July 2017.

The combination with Maersk Oil offers Total an exceptional overlap of upstream businesses globally which will enhance Total’s competitiveness and value in many core areas, in particular through some high quality growing assets and through the delivery of synergies. Specifically the transaction will bring the following benefits to Total:

Around 1 billion boe of 2P/2C reserves, 85% of which are in OECD countries (more than 80% in the North Sea), contributing to Total’s continuous balancing of country risks of its portfolio to enhance shareholder value The addition of 160 kboe/d of mainly liquids production in 2018, acquired at an average price of 46 k$/boepd, offering high margins with an estimated free cash flow break-even of less than $30 per barrel and growing to more than 200 kboe/d by the early 2020’s further strengthening Total’s leading production growth outlook Total expects to generate operational, commercial and financial synergies of more than $400 million per year, in particular by the combination of assets of Total and Maersk Oil in North Sea, an area of excellence for both companies The transaction is immediately accretive to both earnings and cash flow per share underpinning Total’s dividend profile.

At closing of the transaction, in order that Total’s shareholders benefit from the accretive impact of the acquisition of Maersk Oil on earnings and cash flow, the Board of Directors of Total will consider removing the discount offered on the scrip dividend.

Commenting on the transaction, Patrick Pouyanné, Chairman and CEO said, “This transaction delivers an exceptional opportunity for Total to acquire, via an equity transaction, a company with high quality assets which are an excellent fit with many of Total’s core regions. The combination of Maersk Oil’s North Western Europe businesses with our existing portfolio will position Total as the second operator in the North Sea with strong production profiles in UK, Norway and Denmark, thus increasing exposure to conventional assets in OECD countries. Internationally, in the US Gulf of Mexico, Algeria, East Africa, Kazakhstan and Angola there is an excellent fit between Total and Maersk Oil’s businesses allowing for value accretion through commercial, operating and financial synergies.

We are also very pleased that we will have a new anchor point in Denmark which will host our North Sea Business Unit and supervise our operations in Denmark, Norway and the Netherlands. We intend to build on the strong operational and technical competencies of the Maersk Oil teams in the same way we managed to do it in Belgium with the teams of Petrofina in the refining & chemical businesses."

Patrick Pouyanné concluded : “This transaction is immediately accretive to both cash flow and earnings per share and delivers further growth over coming years. It is in line with our announced strategy to take advantage of the current market conditions and of our stronger balance sheet to add new resources at attractive conditions. By adding such a portfolio of growing conventional offshore North Sea assets, we confirm our strategy for value creation of, on the one hand, playing to our core strengths in order to grow further and, on the other hand, to constantly seek to lower our break-even by delivering significant synergies. This transaction will deepen and accelerate this strategy significantly, as Total will become a 3 Mboe/d major by 2019 to the benefit of all Total shareholders.” Key Themes of Transaction - Acquisition transforms Total’s North West Europe outlook.

The transaction also will strengthen other core Total regional businesses due to clear complementary positions between Total and Maersk Oil including: