Tow and Blow on display in Northwest Michigan 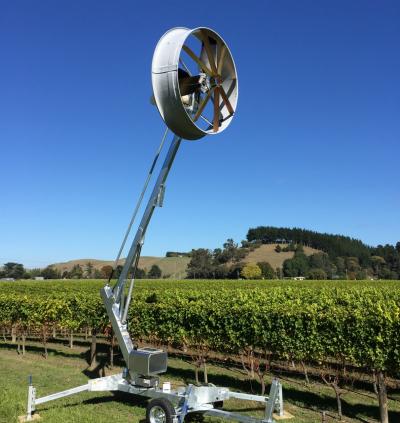 TRAVERSE CITY — Devices to help farmers get over, around and through orchards and vineyards were on display during the Northwest Michigan Horticultural Research Center's annual open house last week.

Seven agricultural equipment vendors — three from the area — sprawled out down the hill from the Research Center office and conference building.

One area vendor, Herman's Mobile Service from Suttons Bay, towered over the other companies.

Herman's displayed a mobile frost fan that extends 28 feet into the air. Built by Tow and Blow in New Zealand, the device is powered by a diesel engine.

"This machine will cover 11 acres," said owner Pat Herman. "The new model that is coming in now are 14 acres. Diesel engine. They're quiet, like a lawn mower. The biggest thing with these is portability. You can move them from one crop to another or put them away when you're done with them."

"We're going to have slightly less coverage than them, maybe one to two acres," he said. "But the other thing we have going is we burn about a gallon and a quarter of fuel an hour where those are going to burn about 13. It's a big difference."

The mobile frost fans also feature a temperature-controlled start. Herman said the $37,000 price tag is "very comparable to the stationary ones."

Herman said his company has been carrying the product for three years. He said Herman's Mobile Service sells many of the mobile units in Ohio, New York and Wisconsin.

More in this category: « China: Fruitday retails first New Zealand persimmons Greytown's JR Orchards 30% increase in production due to netting »
back to top
May 03, 2018