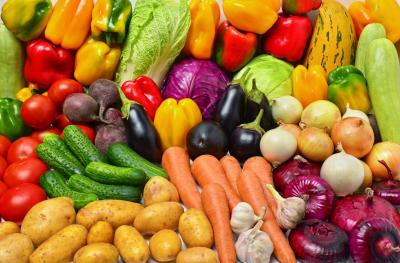 FreshPlaza | The link between weather and the price of vegetables has become all too apparent for shoppers in recent months. Grocery prices across New Zealand skyrocketed after back-to-back storms wiped out entire crops.

In our household, we swapped kumara for potatoes, after prices nudged $9/kg. Kumara was just $3.12/kg in July 2016, according to Statistics New Zealand.

It's been a terrible growing season for vegetable producers. This year's kumara crop was just one of the casualties. Planting was delayed by unfavourable weather conditions. The seedlings then struggled through a dry summer.

The country's commercial crop is grown in Dargaville and Ruawai in Northland. Record-breaking rain drenched the region just before the harvest was due to start. Mechanical harvesters couldn't get onto the waterlogged paddocks.

I've seen photos of workers trudging through mud, trying to salvage what they could of the crop.

Further south, the fertile dark brown soils of Pukekohe are used to grow everything from onions, to lettuces, squash and broccoli. Vegetables are a big earner for the region.

But Pukekohe wasn't spared when ex Tropical Cyclone Debbie pounded parts of the country. Figures from NIWA show on April 4, Pukekohe received 84mm of rain. It was one of numerous areas to experience their wettest April day on record.

The deluge wiped out entire crops of green vegetablesThe storms triggered supply shortages. It was reported that some supermarkets in the North Island were left with empty shelves. Lettuce hit $10.56 a kilogram in May, up from $4.23 a year earlier, according to Statistics New Zealand.

Vegetable growers did an excellent job explaining the flow-on effects of miserable weather. Hopefully it meant shoppers pushing trolleys around the fruit and vegetable section of supermarkets at least knew why prices had spiked.

That's why I was surprised to see an Auckland restaurant owner in the media complaining about the hike in vegetable prices. Tobias Roebuck-Ward labelled the high prices "ridiculous" and "absurd". His Ponsonby restaurant had reportedly spent 42 per cent of its weekly food sales in early June on produce. Typically, that figure was between 30 and 35 per cent.

Roebuck-Ward said the rise in prices was difficult for his trendy eatery because it had a no freezer philosophy and bought fresh produce daily. We've had breakfast at his restaurant. It was amazing. But his comments left me feeling like he was out of touch with the daily challenges faced by growers.

I'd hate to think what we would have done if we'd had to rely solely on our vege patch last summer. The tomato crop was a failure. The capsicums grew to the size of a golf ball, then stalled. The perpetual spinach, snow peas and butter beans were the only things that thrived. In fact, the snow pea crop was probably a record one.

Other Taranaki green thumbs were in a similar predicament. Slavko Nikolovski's prized vegetable plot was a mass of rotted fruit and leaves when Stuff spoke to him in mid-April. It was usually brimming with ripe capsicums, verdant sweetcorn and dark juicy grapes.

The fact that some consumers are still grumbling about the record-high cost of vegetables highlights the disconnect between shoppers and reality. If you've ever tried growing broccoli, cauliflower and kumara in your backyard, you'll know they take months to grow - not days. Those storms may seem like a lifetime ago, but it's only been a few months. That's why the flow-on effects are still being felt at the checkout.

In many cases, entire rotting crops had to be replanted. That couldn't happen until sodden soils had dried out enough for tractors to get on them.

I spent a number of years working as a reporter in Orange, which is about four hours inland from Sydney. At the time, the region was gripped by a prolonged drought. Rain would bring hope to weary sheep and cattle farmers, but it could often be a curse for orchardists. A hail storm at Christmas would split cherries, wiping millions from the crop's value. That's why it's important people always try to understand the connection between the weather and their food.

More in this category: « Gisborne to develop tropical fruit demonstration farm. Do you work with chilled foods? »
back to top
Jun 02, 2018