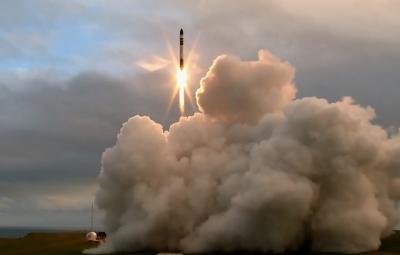 The flight is the second of three in Rocket Lab’s Electron test program and follows the successful inaugural Electron test flight carried out on May 25, 2017.

Peter Beck, Founder and CEO of Rocket Lab, says carrying a test payload marks a significant milestone for the Electron program, enabling Rocket Lab to gather crucial data and test systems for the deployment stage of a mission.

“We’re thrilled with Electron’s performance in the first test flight and now we’re eager to test the next crucial step – payload deployment. No major changes to the launch vehicle hardware have been required, the third-party error that meant we didn’t make orbit has been corrected and we’re focusing on the six Electron vehicles in production right now,” said Beck.

“While we’re still very much operating in a test phase and can likely expect a few scrubs during the second test flight attempt, we’re incredibly excited about carrying Planet and Spire payloads on Electron. The data these companies gather has an increasingly significant role to play in how we understand our planet and better manage it,” said Beck.

Mike Safyan, Senior Director of Launch at Planet, said: “Our companies have long shared an ethos of dreaming big and executing on that vision, so it’s only fitting that Planet is among the first payloads to fly on a Rocket Lab Electron. The Electron will be a game changer in a traditionally difficult launch market. We are excited to quite literally be riding the leading edge with Rocket Lab.”

"The ability to iterate quickly and execute on an incredibly high level is core to the success of both Rocket Lab and Spire. ‘Still Testing’ is a culmination of that work into a single event,” said Peter Platzer, CEO of Spire, “and we're proud to be onboard for this inaugural deployment attempt.”

The Electron vehicle for the ‘Still Testing’ flight is expected to be trucked to Rocket Lab’s Launch Complex 1 on the Māhia Peninsula, New Zealand, in October 2017, with a launch window to open in the weeks following once vehicle checks are complete.

More in this category: « High-tech and fruit sorting First ever NZ Tech Leaders group launched »
back to top
Jul 05, 2018