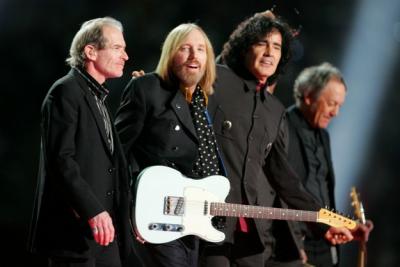 I still have my copy of Tom Petty & the Heartbreakers’ Greatest Hits on CD. It was one of the first CDs I bought after acquiring a shitty boombox from an older kid at school. Up till then, it had all been tapes: The Rhythm Volume 3, Joyride, Use Your Illusion II, The Simpsons Sing the Blues.

With a CD, you could skip the tracks. That was the big selling point. Sure, the sound quality was supposedly immaculate, but what the hell did I know? CDs were big, beautiful objects to own. They were an investment which promised, in the excessive ‘How to Care for your CD’ notes which frequently accompanied the early ones, ‘a lifetime of listening enjoyment’. No more spooling the tape back in with a pencil! For a modest investment of $33 today you can guarantee that when you’re on your deathbed you’ll be able to skip straight to ‘Informer’ on Snow’s 12 Inches of Snow.

In 1993, the massive singles from Tom Petty’s Into the Great Wide Open were still current, with the videos being played alongside Green Jelly and C+C Music Factory on RTR Countdown. But they were already classics. ‘Free Fallin’’, ‘Into the Great Wide Open’, ‘Learning to Fly’ and ‘Mary Jane’s Last Dance’ were rich and fully formed capital R Rock; they seemed to belong to another generation. The guy had a weird mumbly non-voice like the old dude off Dire Straits. The songs were kinda like Bruce Springsteen but without the bombast. And he looked like a skeleton. How old were these guys? Is it OK to keep the video recorder going to catch the creepy ‘Mary Jane’ video when all I wanted was the ‘In Bloom’ one? Brendan says this song is about drugs. Have I ever liked a song with a harmonica in it before?

The hugeness of those hits did not suggest a backstory. They were the story: massive, singalong standards that your friend’s older brother’s friend could play on guitar. They belonged to everyone. Because of this, Tom Petty & the Heartbreakers did not seem to fit anywhere. In 1993, they were not canonised, like the Rolling Stones and Pink Floyd, nor were they ushering in something new like Pearl Jam and Nirvana. And Tom Petty was in a band with one of the Beatles? What is he, like, 60? Was there anyone else making music this restrained and commercial that we all agreed on?

But though we all liked that stuff, Petty wasn’t ours. This was Older Brother’s Music. The idea of risking $33 on a copy of Full Moon Fever on CD was prohibitive, especially when you’re saving up for the Spin Doctors’ Pocket Full of Kryptonite.

The songs were insistent. They were everywhere. They became mixtape staples. They were used to score cricket highlights. You heard them coming out of builders’ radios and student flats. Nobody could change the station when they heard the chime of that opening chord of ‘Free Fallin’’. You could make a decision to not like Paul McCartney or Neil Young: with Tom Petty you had no choice.

So the release of a greatest hits album was, as the sales figures bear out, a smart move. The album was massive. There were 18 tracks on it – great bang for your buck – and I knew about six of them. The great thing was, I could skip straight to those bangers. And by not buying four CD singles, I’d saved myself about $7.

OK, I am now going to ask you to try to imagine what it is like buying a CD with ‘American Girl’, ‘Refugee’, ‘The Waiting’ and ‘Don’t Come Around Here No More’ on it having never heard those songs before.

More in this category: Guardian Thursday Morning Briefing »
back to top
Aug 23, 2018