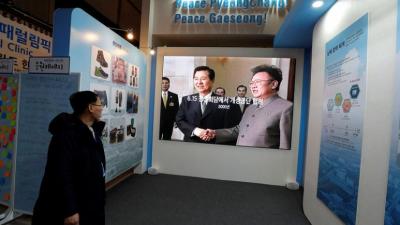 PYEONGCHANG/GOSEONG, South Korea (Reuters) – When South Korean businessman Park Nam-suh was forced to abandon his factory in a North Korean industrial complex two years ago, he thought his business was finished. Now, he dares to hope.

The Kaesong complex, funded by South Korean firms and manned by workers from the North, shut in 2016 after the South accused North Korea of taking workers’ wages to fund its arms programme.

But now South Korea is in the mood to re-engage with its old enemy, using its first Winter Olympics this month to attempt a thaw in relations — and giving Park and other former investors in Kaesong some hope that the industrial park can be revived.

“I hope the Olympics will be a turning point in achieving inter-Korean peace and speeding up the reopening of the Kaesong complex. It should be,” said Park whose factory produced plastic toys, clothes hangers and cups.

He was one of 124 former Kaesong factory owners who set up a a booth at South Korea’s Olympics venue of Pyeongchang this week, screening videos to passers-by and featuring the slogan: “We need to go back”.