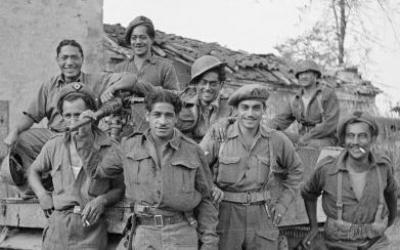 A Māori historian is searching for the stories and photos of war veterans from the 28th Māori Battalion's D Company.

Harawira Craig-Pearless wants to hear from the families of veterans who come from the East Coast of the North Island, between Māhia and South Wairarapa.

Last year, Mr Peerless was commissioned to put together a book on the 900 men who served in Company D of the 28th Māori Battalion during World War II.

Soldiers came from throughout the Pacific including New Zealand, Hawaii, Samoa, Tonga and the Chatham Islands.

Around a quarter of the men who served were killed and are buried overseas, Mr Pearless said.

There is only one living soldier from Company D - Lieutenant Bunny Priest who lives on Chatham Island.

He has collected stories from veterans in the South Island, and now wants to hear from veterans' families from the Ngāti Kahungungu region.

"I sense that there's greater willingness of our mōrehu now to have these stories told about their loved ones," he said.

He also wants to create a photo collection and expects the whole project to take two years to complete.

More in this category: « Mahia student wins Rocket Lab scholarship Help for those who suffer in silence »
back to top
Mar 30, 2018