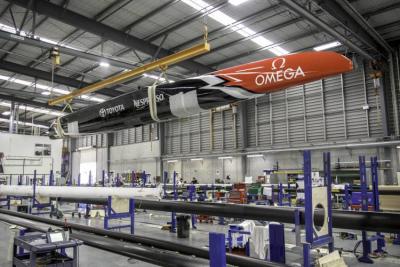 One of the hulls of Team NZ’s winning AC50 in the Southern Spars facility in Avondale. Photo: Hamish Hooper/ETNZ

The Cup defenders have decided to build the hulls of their two AC75 foiling monohulls in-house for the 2021 Cup regatta on the Hauraki Gulf, after more than two decades of having their race yachts constructed at Auckland boatyards, Newsroom can reveal.

Team NZ’s chief operating officer, Kevin Shoebridge, says the decision to have their own building facility was about “having control over what we do”.

“We push things to the limit. We’re often late. We want to try different stuff,” he says.

“We just believe that having in-house control over the build will give us the ability to do a really nice job.

“And it will also give us the manpower that if we want to do something quickly, we don’t have to wait for a commercial yard to fit us in. We can change the plan overnight and just do it. It’s hard doing that in a commercial yard."

Team NZ are in the process of finding a yard on Auckland’s North Shore to build their boats.

In 1995, the victorious Black Magic sisters were built at McMullin and Wing in Mt Wellington. Between 2000 and 2013, all eight of Team NZ's boats came out of the Cookson Boats yard in Glenfield.

Last year’s winning AC50, Aotearoa New Zealand, was borne out of the huge Southern Spars facility in Avondale. It was the first time the world-renowned spar-makers had constructed a boat - a job that took more than 30,000 man hours.

The Cookson team also worked on the last boat, but since then, the once-thriving yard run by the Cookson family has closed its doors. For years, managing director Mick Cookson said the work with Team NZ kept them in business.

“We had a great relationship with Mick Cookson,” Shoebridge says. “But with him not being there, it's hard to find that [relationship] again.”

A number of key people from Cookson Boats have now been employed by Team NZ for their 25-strong boatbuilding team. Among them is Geoff Senior, who’s taken on the role of Team NZ’s construction manager.

“These guys have been part of our team before. When the heat came on in Bermuda in the last two months, and we needed people urgently, they flew over and helped us," says Shoebridge. "They definitely have the know-how and the smarts to do the job well."

Team NZ also want to give an opportunity to some young people without boatbuilding experience, and train them in the field.

That team of 25 boatbuilders will be in addition to the 95 people Team NZ will employ to work out of their new base in the Viaduct Events Centre. Team NZ will begin moving in this September.

Sean Regan, who made headlines as Team NZ’s shore crew co-ordinator overseeing repairs to Aotearoa after it pitch-poled in Bermuda, will run the boatbuilding programme.

Team NZ have always prided themselves on boosting the local marine sector during their America’s Cup campaigns. Shoebridge says that won’t change in the lead up to 2021, with the team still “leaning heavily” on the New Zealand boating industry for many of the boats’ components.

“A lot of the companies we used last time we will use again,” he says.

That includes Southern Spars, who will build the masts for both boats. Southern Spars and North Sails have already been working on developing a “D” shaped spar with a soft wing for the new class of America’s Cup yacht.

The mast is a one-design component in the AC50, and Shoebridge hopes other America’s Cup teams will employ Southern Spars to build their spars.

In the last Cup campaign, Team NZ had their own facility to make the catamaran’s dagger-boards, at Jackson Electrical in Onehunga. “We had our own little in-house group of 10 guys who built all of our dagger-boards. A lot of people didn’t know about that,” Shoebridge says.

Core Builder Composites, the Warkworth-based company owned by Larry Ellison’s Oracle Racing, made hardware for all of the teams in the last America’s Cup, including the Kiwis. Shoebridge says Team NZ hopes to involve Core Builders in this edition as well.

Under the 2021 Cup protocol, each team must laminate the hulls of their two race boats in their own country. All other components can be manufactured anywhere in the world.

Some of the parts, though, will be supplied to all teams in a cost-cutting move by Team NZ and the Challenger of Record, Luna Rossa. The foil arms, for example, are all being built identically at the Persico boatyard in Italy, to be supplied directly to the teams.

Team NZ are also making the cant system - the brain of the boat’s electronic and hydraulic system. “We are designing, building and supplying that to all of the teams. There are components for the cant system coming in from all over the world, but we will put them all together for every team,” Shoebridge says.

“It’s a really complicated system, and if all the teams were doing their own, it would be an unnecessary expense.

“It means teams can get away with having fewer designers. There’s still enough scope and design flexibility in the rule that they can gain advantage through other areas. Everyone is on the same page with that.”

More in this category: « Secret plan to set up Pacific Islands Super Rugby team by NZGovt NZ cycling stars to chase championship honours in Napier »
back to top
Jul 20, 2018