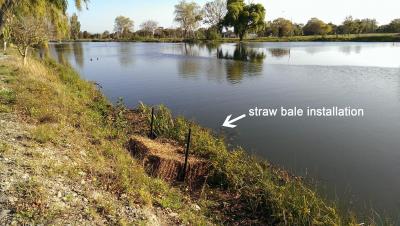 An artificial habitat installation on a degraded section of riverbank in the Avon catchment in 2015. Photo: Shane Orchard.

University of Canterbury researchers have been successfully locating, protecting and studying whitebait spawning sites in Christchurch city rivers with help from the humble haybale.

Doctoral researcher Shane Orchard, along with University of Canterbury marine ecologists Dr Mike Hickford and Distinguished Professor David Schiel at the College of Science, have been working to improve the protection of whitebait spawning sites. Their new paper published in the scientific journal Ecological Indicators sets out the science behind using artificial habitats such as haybales to find areas used for spawning in degraded waterways.PhD candidate Shane Orchard, who is based in the Waterways Centre for Freshwater Management, conducted a study using haybales as artificial habitats, to help with spawning surveys of the Ōpāwaho Heathcote River and Ōtākaro Avon River.“As part of our whitebait spawning research we developed a method using artificial habitats – haybales – as an experimental tool. This will provide useful information alongside field surveys designed to locate and map the areas used for spawning,” Mr Orchard says.It helps by improving the chances that eggs laid in degraded locations will be found. Previous UC research has found that most eggs will die in these conditions – and they could easily have disappeared by the time a field survey was done.This technique was used successfully to investigate major shifts in spawning habitat due to the Canterbury earthquakes.“A surprising result from our spatial ecology work was the discovery that spawning habitat had expanded following the Canterbury earthquakes to be more extensive than ever recorded. The Avon Heathcote Estuary/Ihutai waterways are now home to the largest documented spawning area for any catchment in New Zealand.”The artificial habitats work included the project ‘Whaka Inaka – Causing Whitebait’, a successful collaboration between UC, EOS Ecology, K4 Cultural Landscape Consultants, and Te Rūnanga o Ngāi Tahu. The Whaka Inaka project involved installing a large number of bales to detect degraded areas that could be restored, and engaged the Christchurch community, including several schools, in the haybale experiment to raise awareness of conservation needs.In future, a similar approach could be useful to identify spawning locations in other catchments or to help monitor spawning activity over time, especially in degraded riparian environments, Mr Orchard says.The technique directly supports conservation planning by helping to address the need for accurate information on spawning locations. It also provides useful information for restoration work by confirming beyond doubt that spawning can occur in those areas.Key facts· Īnanga (Galaxias maculatus) is the mainstay of New Zealand’s whitebait fishery, but is declining in numbers.· Spawning habitat is found on waterway margins that are often degraded by human land uses.· In degraded locations spawning may happen but most of the eggs will die. This also makes detection of these sites more difficult, but if identified they could be protected.· Using artificial habitats, such as haybales, can overcome this detection problem. · Artificial habitats can help identify and confirm the location of spawning – and this information is directly useful for whitebait conservation.Orchard DSE., Hickford MJH. and Schiel DR. (2018) Use of artificial habitats to detect spawning sites for the conservation of Galaxias maculatus, a riparian-spawning fish. Ecological Indicators 91: 617-625. http://dx.doi.org/10.1016/j.ecolind.2018.03.061. (The paper can be freely viewed/downloaded until 15 June via the following link:https://authors.elsevier.com/a/1WyBS,XRNLZ1JK)

More in this category: « UNH researchers shine a light on more accurate way to estimate climate change Recycling a sitter at Ellerslie Event Centre »
back to top
Jun 02, 2018