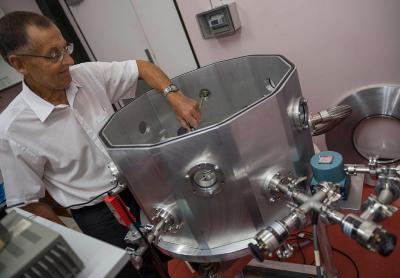 It’s official, the international science community has voted to change the way weight, electric current, temperature and substance amounts are defined. Instead of comparing masses with a lump of metal kept in a vault in Paris, scientists will now use quantum physics and great engineering to define and realize the international mass standard. A kiwi scientist has developed an innovative desktop measurement instrument that could become widely used when the changes come into force next year in May.

On 16 November at the General Conference on Weights and Measures in Versailles, New Zealand voted in favour of a new global definition for the kilogram (weight), ampere (electric current), kelvin (temperature) and mole (amount of substance).

Instead of revolving around physical objects, such as the 129-year-old metal cylinder in Paris, these measurements will be redefined based on natural constants – quantum physics and the Planck constant. The woman who cast New Zealand’s vote is Dr Fleur Francois, Director of the country’s national metrology institute, the Measurements Standards Laboratory (MSL).

“It’s crazy to have a system of measurement based on something that’s not stable. To be able to trade, innovate and have trust in everyday measurements, it’s important we move away from physical objects, which can change, to more stable constants of nature,” says Dr Francois.

“The change to quantum physics will open up a whole new world of innovation opportunities. For me, when I think about space exploration – and who knows, we might colonise Mars one day – we’re going to need to be able to measure to greater accuracy using standards that are more universal than a single piece of metal in Paris.”

The changes to these units will ultimately impact every industry, from aviation and beverages to natural gas and pharmaceuticals, and as history has shown may enable new technologies, Dr Francois says. But if metrologists (measurement scientists) do their job properly, the average person won’t notice a thing.

“A kilogram is only a kilogram because we all agree it is. There’s something comforting about the fact that regardless of what’s going on in the world, we all understand that a universal measurement system across borders is extremely important.

“Accurate measurement of current, for example, is important for electrical devices like smartphones and laptops, as well as for developing sustainable batteries with longer lives. The improvements to temperature measurement will enable more precise global climate monitoring and better predictions for climate change.”

Right up until 20 May next year, when the new measurement standards kick in, the kilogram will continue to revolve around a 129-year-old little cylinder of metal kept in a vault in Paris. Currently scientists from key agencies around the world fly their measurement equipment to Paris to calibrate against ‘the big K’ or ‘le grand K’. But over the years its mass has shifted, and the world scientific community has decided that quantum physics must come to the rescue.

Renowned kiwi scientist Dr Chris Sutton and his Lower Hutt based colleagues at MSL have created a desktop version of a super-precise instrument. The Kibble Balance will produce New Zealand’s primary kilogram and could be used by many other countries.

“In the Northern Hemisphere the equipment needed to measure the new kilo cost millions and is literally the size of a two-storey building,” Dr Francois explains.

“All we really need is a device that allows us to plug in a natural constant of nature along with other variables, and from this calculate a kilogram to a high enough accuracy. The Kibble Balance is a stroke of kiwi ingenuity that does all this for us.”

The Kiwi Kibble Balance will be the only one in this part of the world, with some other Southern Hemisphere countries likely to rely on it for their measurements. The invention contributed to Chris Sutton winning one of metrology’s top international awards last year.

For more information visit the MSL website or contact MSL on This email address is being protected from spambots. You need JavaScript enabled to view it.

About the SI Redefinition

More in this category: « Chief Coroner and Police meet with Pike River families Medicinal cannabis producer gets Kiwi logo »
back to top
Sep 19, 2018