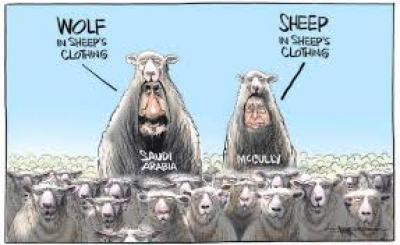 Reader insists that the question must be asked

In regard to the mysterious “agro Centre” which has appeared somewhere in the Arabian desert seemingly built and constructed by the New Zealand taxpayer you, the Taxpayers Union, and other questioners have all been asking the wrong question.

If it is not, and as no direct payment from the Saudi royalty involved appears to be expected, then, you and Mr Williams of the Taxpayers, are correct in assuming that it is all a magnificent bungle.

One contributing reason is that in the Middle East now the demand for live sheep is lessening and the reason is the problem throughout the region in keeping them alive with fresh water.

The reason I am inclined to think, and indeed, hope, that this is a counter trade, perhaps still to be realised at the Saudi end, is that it makes such sense. We could well be looking, for example, at a third country involvement somewhere in say South America or Africa.

In such an instance it would make sense for the Saudi acquirers to send oil to a third party in one of these countries which in turn would send a commodity such as fertiliser to New Zealand in conclusion of the payment cycle.

Such a contingency should now be investigated. Sufficient time has elapsed for such a counter deal to have been rotated. It’s existence or not should now be determined.

Rod Oram: Should Fonterra be broken up?