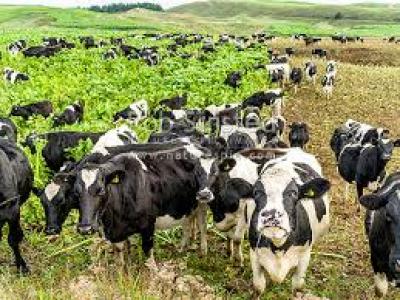 The first comprehensive OECD report on New Zealand’s environment in a decade calls for action on cows’ greenhouse gases and water pollution, better public transport and warmer housing, including cosier new-builds. It lands on the same day as another report outlining ways to cut emissions – by reducing cow numbers, reports Eloise Gibson.

It’s all about cows, although our cars and cities could also use a tidy-up, the OECD has concluded.

In their first comprehensive report on New Zealand’s environment in a decade, the OECD’s environmental review team called for agriculture to be brought into the Emissions Trading Scheme and said the Government needed a plan for meeting its greenhouse gas targets, while still earning more from exports.

Conveniently, the same day, London-based consultancy Vivid Economics published a plan commissioned by a cross-party group of MPs outlining how New Zealand could do its part to keep global warming under a 2°C increase.

Again, it was all about the cows. Even with ambitious improvements in renewable electricity generation and other sectors, Vivid concluded New Zealand will need to cut livestock numbers and plant more trees to be carbon neutral by the end of the century and meet the goals of the Paris climate accord. Cow herds would need to shrink even assuming impressive leaps in science and technology, like the fruition of Kiwi scientists’ efforts to design a vaccine making cows burp less greenhouse gas.

Both reports raise questions about how the Government’s goal of increasing exports can be reached without huge environmental costs, unless we also change how, and what, we farm.

And both reports question how New Zealand will meet its environmental goals if it keeps intensifying dairying.

“New Zealand’s growth model, largely based on exporting primary products, has started to show its environmental limits, with increased greenhouse gas emissions, diffuse freshwater pollution and threats to biodiversity. A long-term vision for the transition towards a low-carbon, greener economy is necessary,” says the OECD report.

“There are likely trade-offs between continued reliance on exporting primary products and environmental and climate change mitigation goals. New Zealand should build on its well-developed knowledge and innovation system for exporting higher value export products and decouple growth from natural resource use,” it adds.

Cars and cities feature, too. The OECD report includes advice for building more liveable homes and cities, less-polluting transport and cleaner waterways. Ramping up public transport investment instead of pouring money into roads, levelling taxes favouring diesel over petrol vehicles, doing more to encourage electric cars and better housing insulation are all on the “please do” list. And it’s not just mouldy old villas that are highlighted in the housing efficiency area. Even new houses are not being built to as high an energy-efficiency standard as they are in many other countries, meaning they may one day need retrofitting, says the report.

When it comes to cars: “Freight and people travel mostly by road; the car ownership rate is the highest in the OECD; and the fleet is relatively old and inefficient,” is its summary of New Zealand’s transport system.

The review team prefaces its comments by recognising New Zealand gets a lot of things right. We have a green reputation, our cities have plenty of green space, we are good global citizens and people have good access to clean air and pristine wilderness, it says.

The good, the bad and the going-to-get-worse

Cows feature heavily in two of the most critical parts of the OECD report – greenhouse gas emissions and waterways. On water quality, the review team notes some good progress by the government in bringing in a national policy on freshwater, and efforts by farmers and rule-makers to fence waterways and clean up Lake Taupo. But it says regional councils are implementing the national water policy slowly and patchily, saying they need more help from the government if they are going to clean up freshwater, faster.

Depressingly, the report points out there might a significant lag in the water-dirtying system, meaning pollution that has already left farms during the dairy boom is yet to reach waterways – and even with the best clean-up effort, water quality may get worse for a while.

Urban storm-water is a problem too, with the review labelling city runoff to waterways as a growing public health concern

Cows and other farm animals also cropped up as a major obstacle to meeting greenhouse gas targets. Leaving farming out of the Emissions Trading Scheme was listed as one of the main reasons why the ETS hasn’t been effective, along with a flood of cheap international credits and other measures that have kept the price of carbon too low to spur people to action.

The review recommended several ways to sharpen the ETS’ teeth, including bringing in animal burps, livestock manure and emissions from nitrogen fertiliser sooner rather than later.

“Given the significance of agricultural biological emissions, continuing to shield them from mitigation obligations would make meeting these objectives harder, place a disproportionate burden on other sectors and slow the pace of adjustment in the agriculture sector,” the report says.

Another report, also out today, by London-based climate and economic consultants Vivid Economics, laid out some options for New Zealand to reach carbon neutrality in the second half of the century, all of them requiring shifts away from farming cows.

The report was commissioned by a cross-party group of MPs called GLOBE-NZ, a chapter of GLOBE-International, a global group of parliamentarians who are working on climate and environmental issues. The New Zealand chapter was formed a year and a half ago and includes MPs from every party, led by Green MP Kennedy Graham. It paid for the report using funding from charitable donors (including the Morgan Foundation), the British and U.S embassies and companies including Vector, Mercury Energy and Z Energy.

The Vivid report came up with various scenarios for New Zealand to become carbon neutral before 2100 and do its part to meet the Paris climate goal of keeping warming to a rise of 2°C, or, ideally, lower. It concludes we can be carbon neutral this century, but not without replacing some of our cows with trees.

First the authors look at a technologically optimistic scenario, where efforts to design fixes for farm and household greenhouse gases come to fruition by 2050. Such fixes would include New Zealand’s bid to design a vaccine to cut methane belching by sheep and cows, selective breeding of more climate-friendly animals and precision agriculture to curb nitrogen waste. Electric heating and use of electric vehicles for freight would also need to make a major leap. We would still need to have less livestock, including cows - about 20–35 per cent fewer animals than today – and more forestry, but there would be room for a diverse range of land uses, including horticulture and a substantial dairy industry.

If, on the other hand, the hoped-for techno-fixes do not pan out so impressively, New Zealand would need to plant 1.6 million hectares of plantation forests to reach carbon neutrality. Again, we would need to cut the dairy herd, though not as drastically, and sheep and beef cow numbers would also need to shrink. And we would still need technological breakthroughs, for example in farming and freight transport, albeit not as radical as in the first scenario. In a third scenario, we keep all our cows, expand forestry only a little bit and ramp up reliance on electric vehicles, renewable energy and other climate-friendly strategies. But this would see us achieve carbon neutrality well after 2100.

All of the paths involved moving towards 100 percent renewable electricity, with more electric vehicles, and shifting the economy to lower-emissions industries such as forestry and crops.

An important factor is what other countries do. As the report acknowledges, there is no point moving away from intensive dairying and meat production for climate reasons if people around the world do not change their diets towards less climate-intensive foods. If demand for milk and meat continues to soar, any drop-off in New Zealand’s production might be filled with products from more-polluting countries. The authors stress the report was designed to explore ideas and options – not dictate what New Zealand should do, regardless of other considerations.

Farming of all animals, but mainly cows, currently makes up about half New Zealand’s greenhouse emissions. Unlike other developed countries New Zealand doesn’t have the comparatively straightforward option of reforming its electricity generation to radically cut emissions, because most of our power is already renewable.

So far the major gains in farms’ greenhouse efficiency – here and globally - have come from raising productivity, thus shrinking the CO2 hoof-print per kilo of food produced. But raising the productivity and intensity of farming has placed added pressure on the environment, as the Vivid Economics and OECD reports highlight.

The Vivid authors say New Zealand is in a “distinctive” position among developed countries because of its high animal emissions. But they also say we are lucky not to have to contend with an entrenched reliance on coal power, like some countries.

More in this category: « LGNZ launches Water 2050 to develop cohesive water policy OECD environment report welcomed »
back to top
May 07, 2018