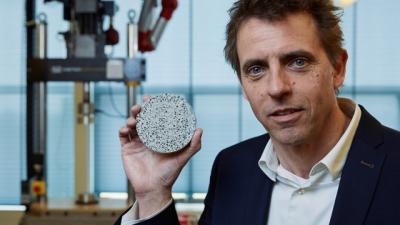 Munich/Delft, 21 April 2015 - Buildings and structures made of concrete that can "magically" seal and fully repair cracks caused by tension? What may have seemed a utopian scenario just a few years ago will soon become reality, thanks to the invention of microbiologist Hendrik "Henk" Marius Jonkers (50). His vision: to develop a bionic approach that improves the tensile strength and eco-friendly properties of concrete. The Dutch researcher set out to develop the bio-concrete of the future - with limestone-producing bacteria that can survive in a concrete structure for up to 200 years, and which "awaken" when damage occurs, enabling them to heal the cracks. In Europe, where concrete makes up 70 per cent of infrastructure, Jonkers' ground-breaking innovation promises to reduce the costs of concrete production and maintenance, as well as curb resultant carbon dioxide emissions. For his outstanding invention, Jonkers has been named a finalist for the renowned European Inventor Award of 2015 in the Research category. The 10th edition of the annual award will be presented by the European Patent Office (EPO) at a ceremony on 11 June in Paris.

Henk Jonkers' passion for diving and camping was the spark that ignited his career: it began with studies in marine biology at the University of Groningen in the Netherlands. After completing his PhD in September 1999, he began to focus his developmental work on the observation of bacterial behaviour. He first experimented with limestone-producing bacteria as a research assistant at the Max Planck Institute for Marine Microbiology in Bremen. Self-healing octopus tentacles or plants that create new organisms with offshoots served as inspiration for Jonkers' invention. An expert in bacterial behaviour, he continued his career in 2006 at the Faculty of Civil Engineering and Geosciences at Delft University of Technology. Jonkers' research agenda in Delft focused on finding a solution to transfer the self-healing properties of natural organisms to a man-made building material, concrete.Self-healing agents encapsulated for over 200 years

To heal cracks in the concrete, Jonkers chose bacteria (Bacillus pseudoﬁrmus and B. cohnii), that are able to produce limestone on a biological basis. The positive side-effect of this property: the bacteria consume oxygen, which in turn prevents the internal corrosion of reinforced concrete. However, the bacteria do not pose a risk to human health, since they can only survive under the alkaline conditions inside the concrete. Based on these findings, Jonkers and his team of researchers developed three different bacterial concrete mixtures: self-healing concrete, repair mortar, and a liquid repair system. In self-healing concrete, bacterial content is integrated during construction, while the repair mortar and liquid system only come into play when acute damage has occurred on concrete elements. Self-healing concrete is the most complex of the three variants. Bacterial spores are encapsulated within two-to four-millimetre wide clay pellets and added to the cement mix with separate nitrogen, phosphorous and a nutrient agent. This innovative approach ensures that bacteria can remain dormant in the concrete for up to 200 years. Contact with nutrients occurs only if water penetrates into a crack - and not while mixing cement. This variant is well-suited for structures that are exposed to weathering, as well as points that are difficult to access for repair workers. Thus, the need for expensive and complex manual repairs is eliminated.Sustainable prevention method could revolutionise concrete production

In recent years, bacterial concrete was subject to endurance tests under various external conditions on a dedicated testing building in Breda, the Netherlands. Plans are in place to launch the self-healing material on the market this year. Jonkers' invention has the potential to significantly reduce maintenance expenses for bridges, tunnels and retaining walls, which currently cost EUR 4 to 6 billion each year in the EU alone. Jonkers is now working on an alternative bacterial encapsulation technique. Compared to the present particle coating methodology, this technique would make it possible to cut production costs of bacterial concrete by an additional 50 per cent. Whereas production costs for conventional concrete amount to EUR 80 per cubic metre, a cubic metre of self-healing concrete would cost between EUR 85 and EUR 100 with the new encapsulated healing agent. With significantly lower repair and replacement costs over the lifetime of a building, this minimally higher investment would quickly pay itself off for all concrete structures.Additional resources

Read more about the inventorView the patent: EP2247551

Super-bacteria are the answer: Jonkers' ground-breaking solution is one of many green innovations in the building sector currently under development. Bio-concrete of the future has the potential to lower carbon dioxide emissions released in Europe during construction and modernisation projects, both affordably and sustainably.

More in this category: « Productivity Commission to look at low carbon economy Clean Water reports released »
back to top
Jun 18, 2018