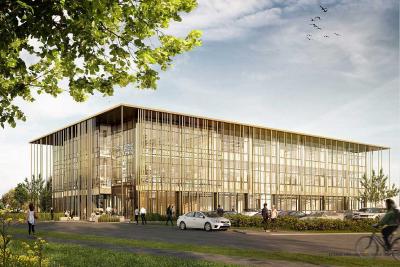 Architectural impression of the new facility.

A new food research facility supporting the future of New Zealand’s exports has reached an important milestone, with a contractor appointed and the construction process to start next week at Massey University’s Manawatū campus.  The $45 million AgResearch and Massey University Food Science Facility will accommodate about 140 staff and students from the two organisations as well as from the Government-funded centre of research excellence, the Massey-hosted Riddet Institute.

It will feature laboratories and shared spaces focused around education and research into meat and dairy in a three-storey, 5000 square metre building that will be New Zealand’s largest agri-food innovation centre.The facility will also be a key component of FoodHQ – a partnership to grow New Zealand’s reputation in food and beverage innovation that includes AgResearch and Massey among its network of science and innovation partners.AgResearch chief executive Dr Tom Richardson says McMillan & Lockwood has been confirmed as the lead contractor to build the facility.“Work to prepare the site for building is due to begin after Waitangi Day next week,” Dr Richardson says. “At this stage, the plan is to have the building completed by October 2019. The occupants will include AgResearch staff already based in Palmerston North, and others working in the food sciences who will be relocating to the city.“This new joint facility concept – similar to what AgResearch is doing with Lincoln University near Christchurch – is going to accelerate innovation by having world-class talent working together under one roof. In the case of food research, it means the opportunity for new generation products that offer exciting new textures and flavours, and improve peoples’ health and nutrition.”Massey Vice-Chancellor Professor Jan Thomas says the facility is another exciting development for the university and its Manawatū campus, and integral to Massey’s collaborations with research institutions and other organisations and businesses involved in growing New Zealand’s food exports and reputation for quality and innovation.“Part of Massey’s strategy is that all our campuses will be innovation ecosystems, magnets for smart enterprises and operated in partnerships founded in respect, trust and mutual benefit,” Professor Thomas says.“The creation of this facility epitomises those goals we have set for ourselves and our partners.”

More in this category: « Successful capital raise for Reefton Distilling Co. Taxpayers’ Union has referred Callaghan Innovation to the Ombudsman »
back to top
Jun 18, 2018