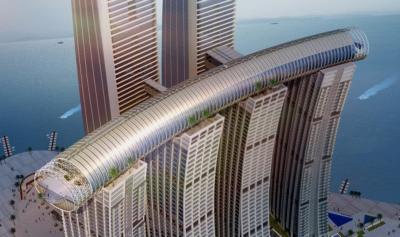 China boasts more than its fair share of impressive engineering feats, including the world's second-tallest skyscraper and the highest bridge. We can soon add highest skybridge to the list too, courtesy of Moshe Safdie's Raffles City Chongqing project, which is currently under construction in southwest China.

Developer CapitaLand's reference to the skybridge as a horizontal skyscraper is an exaggeration, but a forgivable one. Named the Conservatory, this thing is massive and measures 300 m (984 ft) in length. Its curved structure is supported at a height of 250 m (820 ft) by four mixed-use towers, which themselves include offices, apartments, retail space and hotels. An adjacent pair of 350 m (1,148 ft)-tall towers are linked by a couple of smaller skybridges. In all, the project has eight towers planned.

The interior of the Conservatory features an infinity pool, sky gardens, and observation decks. It comprises a steel structure weighing 12,000 tons and is enclosed with 3,200 pieces of glass and 4,800 aluminum panels. Engineering firm Arup is lending its expertise to help the team navigate potential dangers like high winds and seismic activity, not to mention getting the thing up there safely in the first place.

"To erect efficiently, the steel structure is first divided into nine segments – four segments that are built in-situ above the four towers; three middle segments suspended between the four towers that are prefabricated on ground and hoisted into place by hydraulic strand jacks; and two cantilever segments that are assembled in short sections from the two ends of the rightmost and leftmost towers," explains CapitaLand in a press release.Designed by high-profile architect Moshe Safdie, Raffles City Chongqing is meant to resemble a sail

The Conservatory's steel structure is expected to be fully in place by mid-2018. Following this, the glazing will be installed along with the trees and plants for the sky gardens. It should hopefully then be open to the public sometime in 2019.

The Raffles City Chongqing project is also slated for LEED Gold (a green building standard) and energy-efficient measures planned include optimizing shades to reduce heat, an efficient irrigation system, an effort to recycle construction waste, and the use of partly-recycled building materials.

More in this category: « Value of Design report released New partnership to support Boon Edam’s expanded operations in Australasia »
back to top
Mar 05, 2018