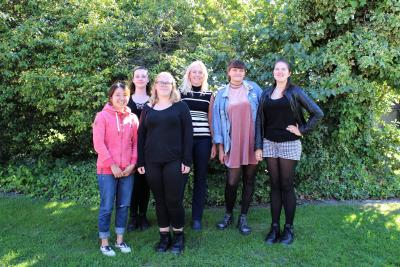 Women make up just over half of New Zealand's population, yet currently they comprise just 17 per cent of the nation's construction industry.  Recently Jenny Parker, the President of the National Association of Women in Construction in New Zealand (NAWIC), visited the Ara Institute of Canterbury's Woolston campus to speak to women trades students and discuss this imbalance of women in trades.

In advocating for women entering the trades Parker says getting women and industry on board is essential to meet industry demands for more qualified tradespeople.

"There's a lot more men in the industry than women of course. In fact, that is across every industry except for hospitality maybe but construction is definitely unbalanced. The number of women in New Zealand's construction industry has doubled to 17 per cent over the last 15 years, which is great. Much of the growth in recent years was a reaction to the earthquakes in Christchurch. A lot of women put up their hands to be part of the redevelopment and the restructuring," Parker says.

In addressing the current women studying trades at Ara Parker applauded their choice to work in a male dominated industry.  "It's not an easy path that you've chosen at all but it's definitely worthwhile. It says a lot about your character, it says a lot about your ambitions in life and it sets you apart from everybody else," Jenny says.

For first year Ara Electrical Engineering student Jorgia Harris trades was the right choice. "I've always liked finding out how things work. One of my male friends had told me that I couldn't do it, so here I am."Classmate Tasha Johnson-Wolsey admits that Electrical Engineering wasn't her first career choice.

"I've actually studied before but when I started working I discovered that I'm not very good in offices, as I get bored quickly. This was one of the other things I had considered in high school. I'm glad I chose electrical because I like the challenge"

Harris agrees, "It is really tough, but it engages you and makes you think. I'm proud of myself"

Dennis Taylor, Head of Department for Trades at Ara wants to see New Zealand industries continue to encourage women to study and work in the trades, by ensuring they know they are valued workers. There are currently 114 female students enrolled in trades courses.

"We have seen the range of industries that we engage with actively breaking down the historical barriers to women working in their sector and those industries recognise the benefits associated with the skills, knowledge and diversity that women bring to the workplace," Taylor says.

More in this category: « Construction of world's tallest tower moves forward after delays Construction sector productivity compromised by delay and uncertainty »
back to top
Mar 13, 2018