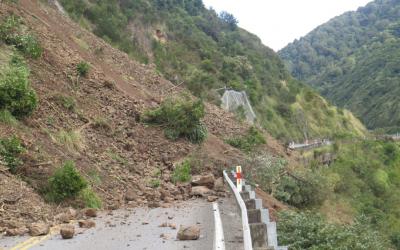 The Manawatu Gorge replacement has finally been confirmed, providing relief and certainty for a region in wait, but it will be a long six years before businesses most affected will reap the benefits.

The chosen route will reconnect the Manawatu, Tararua District, Hawke’s Bay and northern Wairarapa regions, with the new road expected to be completed by 2024.

The route runs from near the Te Apiti carpark at the western entry of the closed Manawatu Gorge, across the Ruahine Range north of the gorge, before emerging at Woodville.

People travelling between Masterton and Palmerston North have been using the Saddle Rd since the gorge closed in April last year, giving commuters the option to bypass Woodville completely.

“We have definitely noticed a huge difference in the amount of people coming through.

“Six years is a long time for a community which relies on people coming through it.”

New Zealand Transport Agency (NZTA) director of regional relationships Emma Speight said the Option 3 route emerged as the safest and most resilient route which best balanced the needs of the communities, businesses and road users.

“Everybody understands just how important a replacement for the gorge is.

“It will re-establish a key strategic transport and freight link that supports the needs of the people and economies of central New Zealand,” Ms Speight says.

NZTA had also committed to investigating a regional freight ring road which would include a second road bridge across the Manawatu River, which they say would help unlock regional economic development opportunities.

Tararua Mayor Tracey Collis said she was really pleased with the decision and said the announcement provided certainty for the region.

She said the inclusion of a freight ring road was a “win-win” scenario.

“Now we can really get ourselves ready for the economic benefits that will come out of it.”

Wairarapa MP Alastair Scott said the decision to go ahead with Option 3 was a good one, but a six-year wait would “continue to frustrate” the region.

“There’s going to be opportunities lost because of the disconnection between east and west.

“If that road was built tomorrow for example, you would see the likes of Woodville and Dannevirke essentially be part of a suburb of Palmerston North – there would be a lot better connectivity.

“It does seem like a bloody long time – and it’s always longer than they expect.”

Labour list MP Kieran McAnulty disagreed, saying cutting a road through a mountain range was not something that could be done quickly.

People were informed and satisfied with the time frames from the beginning.

He said the government had previously said it would “pull every lever possible” to speed this up as much as it could, and he would be continuing to have conversations to see how he could make this happen quickly.

“We will be strong together, and get through together.”

More in this category: « Masterton's old post office building to be developed Waste submissions to be heard in June - Napier & Hastings »
back to top
Mar 07, 2018