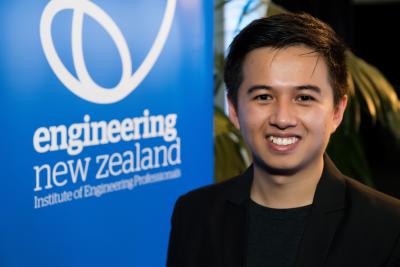 Van Dinh Nguyen, a 25-year-old international student studying a three-year mechanical engineering degree at Ara Institute of Canterbury has been named 2018 Student Innovator of the Year by Engineering New Zealand.

The prestigious national award, which is open to all tertiary engineering departments in New Zealand, celebrates a student engineer or group of students who demonstrate outstanding design in their final-year tertiary project.

Van had already received considerable praise for his project, a micro tidal generator which can work in rivers and in the sea, on both rising and falling tides. Engineering industry representatives awarded it the Industry Choice Award at Ara Institute of Canterbury’s annual Engineering Showcase event last year and it won best project poster at Engineering New Zealand’s national Metro group competition.

Rob Dantzer, manager for engineering programmes at Ara and Van’s project co-supervisor, says Van put in a great effort with his project and is reaping the rewards. “We help our students get to a place where they’re fully responsible for their learning and Van embraced this in spades. He took the reins and by doing so, gained exactly the kind of professional skills needed in the workplace.” Rob adds that Van is a prime example of the high calibre of individuals choosing to study engineering at Ara.

Van, who is from Vietnam, was thrilled to win the award and says it will always be something to remember. “It proves the value of hard work - you really do get out what you put in. It’s given me a lot of motivation to continue with my engineering career.”

Van says he chose to study at Ara because of its emphasis on hands-on learning. “Ara provides more practical knowledge than you get at university and the classes are small – only 10 to 20 students – so there are more interactions between students and tutors.”

He says his project equipped him with skills in time management, technical writing, organisation, communication and researching. “It also helped me to understand more about myself, such as my ability to solve complex problems,” he says.

Invert Robotics offered Van a job after seeing his project at the Engineering Showcase last year. He now works for the company as a mechanical design engineer while completing the last few months of his degree.

“My project impressed my employer and showed them my potential to be a good engineer. It demonstrated my ability to problem solve and think outside the box. It also showed that I have a deep passion for what I’m doing and these are all good things for their business.”

More in this category: « Engineering Skills Put To Test In Summer Design Project Maintenance Society Lifts the Hood on Callaghan Innovation »
back to top
Apr 04, 2018