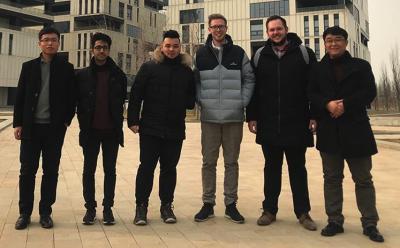 Chanatip Chatchawalit, Jack Hawker, Andy Murray and Hanjun Nakauchi are now back in New Zealand to finish their studies. The group agree that this trip was “the greatest experience they had ever been through.” As recipients of the prestigious Prime Minister’s Scholarships for Asia (PMSA), these third year business students spent five months studying Chinese language at Tianjin University of Technology and Education. They recently gave a presentation to Wintec staff and to Education New Zealand representatives about their time overseas and encouraged other students to take the opportunity should it arise. Wintec international director, Jason Matangi says: “One of the greatest experiences in life is to live and study in a foreign country and the PMSA provides this opportunity. This group has a connection to China that will always stay with them. It has changed their worldview and made them realise what is possible outside of Wintec and New Zealand.” The group had four papers to complete at university and a surprising extra one where Chanatip and Hanjun were enrolled in singing lessons while Jack and Andy learnt kung-fu. For three weeks last December, the group was enrolled in an internship for HC360 (慧聪网 in Chinese, which means "wisdom clever site"), one of China’s leading business to business e-commerce websites for domestic trade. The group was split between different departments: crowdfunding, website, marketing, and 3D projects for Jack, who had the chance to work directly with the company chief executive. “Having that on our resume is so valuable,” says Chanatip. Some Chinese entrepreneurs interested in setting up a business in New Zealand already contacted Jack through LinkedIn. “Networking is fundamental in China,” confirms Jack. “When we arrived in China, it was a real culture shock. It was all very surreal for the first few days,” says Andy. They experienced the efficiency of Tianjin’s public transport, Chinese food that was “a little too oily and salty” for their unaccustomed taste, the easy payment methods thanks to contactless technology or the smartphone, and the accommodation and buildings, influenced by European and Russian architecture. It wasn’t long before they got used to Chinese lifestyle and said they received a warm reception everywhere they went. Jack and Andy also had funny experiences on the street. “Many people wanted to take selfies with us as we have light hair and white skin,” they said. The World Cross Culture Association (WCCA), dedicated to cultural exchanges between international students and Chinese students, has been a great help to all four. “They helped us to get a SIM card for our phones (which is not easy in China, unlike New Zealand), to find their way through Tianjin by showing the points of interest of the city, but also by organising weekly events dedicated to exchange between students,” explains Hanjun. After completing their papers and finishing the university semester, the group devoted itself to a touristy time before returning to New Zealand. They took the opportunity to visit the country, each on their own. Beijing, and its zoo and aquarium, the Great Wall, Piano Island, Hubei and many other fantastic places. All four want to extend their knowledge in Chinese and aim for a career on the world stage. Education New Zealand student scholarships advisor Anna Dekker says: “It is always interesting to hear from recipients of the Prime Minister’s Scholarship for Asia (PMSA). We gain insight into their time on scholarship and hear first-hand the benefits of the PMSA programme. The PMSA enables New Zealanders to discover the richness of overseas learning experiences (international skills, languages, cultural exchange, and networking) and also to make New Zealand's educational model and its quality tertiary institutions known overseas.” The students were chosen for their academic strength and personal attributes including independence, initiative, maturity, confidence and their ability to represent New Zealand positively. The Prime Minister’s Scholarships for Asia are funded by the New Zealand government and administered by Education New Zealand. They were established in 2013 and have enabled more than 1,100 New Zealand students to experience an international education in Asian countries.

More in this category: « New Wintec Council appointment and changes Sparkie lights awards stage »
back to top
May 29, 2018