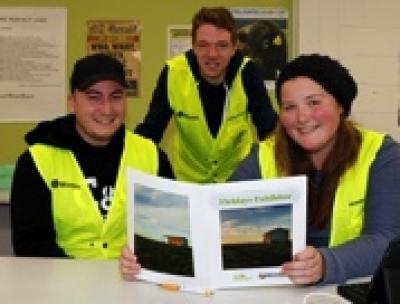 This year marks the 50th anniversary of Fieldays and Wintec is at the forefront in the celebrations. To commemorate the event, Wintec has published a 50-page, one-off exclusive magazine to mark the celebration. As well, the students who produced the magazine will be onsite publishing stories and photographs online during Fieldays 2018.

This year marks the 50th anniversary of Fieldays and Wintec is at the forefront in the celebrations.

To commemorate the event, Wintec has published a 50-page, one-off exclusive magazine to mark the celebration. As well, the students who produced the magazine will be onsite publishing stories and photographs online during Fieldays 2018.

The magazine, a collaborative project in the School of Media Arts, has been added to the commemorative “goodie bag” by Fieldays volunteers and will be delivered to around 1,300 exhibitors and all media attending the event.

“It has been great working with the tutors and students of Wintec to create the magazine,” Taryn said. “I have found working on the magazine very successful.”

The magazine is a culmination of 15 years of work by photography, graphic design and journalism students and staff who have studied collaboratively to create the Wintec Fieldays Exhibitor.

The Fieldays Exhibitor started in 2004 as a project to create a simple four-page pamphlet that was aimed at the exhibitors. Students wrote, photographed, and designed the publication every day to a strict deadline to ensure the delivery to the printers who printed each magazine overnight.

The magazines were picked up by a staff member at 5am, after their coffee stop, each day of the Fieldays.

Exhibitors often read the Fieldays Exhibitor over their morning coffee after students and staff distributed them in all weather conditions – fog, frost bite, rain, hail, or shine could not stop the Exhibitor getting through!

Down the years students and staff never missed a deadline or failed to deliver the magazine, tutor Charles Riddle said.

As the magazine became popular and grew up to 36-pages an edition, the delivery of the 1000 copies every day became too much for the students and the kind Fieldays volunteers took over distribution of the magazine, often using quad bikes (much to the students’ disappointment).

Several editors in residence, including ex-Waikato Times editor Venetia Sherson, and Canon award-winning writer Aimee Cronin, have worked on the Fieldays Exhibitor. This publication is a prime example of an industry and Wintec partnership.

In 2010, The Fieldays Exhibitor received an official commendation and trophy from the Fieldays committee in recognition of the contribution the publication had made to Fieldays. This year was also the year the magazine remained in print but went digital with dedicated student teams managing the live publication of Fieldays news.

This week, Wintec journalism and photography students are onsite at Fieldays, wearing their Fieldays exhibitor vests and gaining some real-world experience reporting from the event. You can read their stories on waikatoindependent.co.nz.