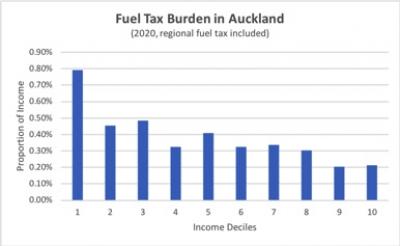 “He is doggedly focusing on the dollar impact of the fuel tax, and ignoring the cost as a proportion of total income.”“It’s no surprise that rich people buy more fuel – they buy more of everything. But people on low incomes spend a far larger proportion of their income on fuel, meaning a tax hike will have a far bigger effect on their real quality of life.”“It only takes five minutes to graph Twyford’s figures and see the real impact of fuel tax.”

“The verdict is clear: fuel taxes whack the poorest almost four times as hard as they whack the richest.” “It’s stunning to see such selective ignorance from a centre-left Minister who is meant to understand issues of fairness and equality. Isn’t this stuff Labour Party 101?”

More in this category: « Official Cash Rate unchanged at 1.75 percent Ravensdown poised for commercial launch of airborne soil testing within two years »
back to top
Jul 04, 2018

Is Auckland headed for disaster?