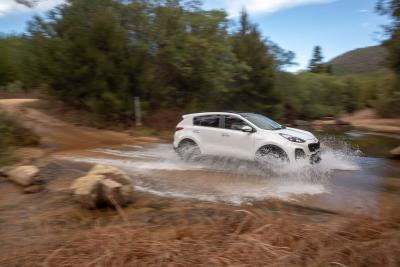 Kia’s best-selling Sportage SUV is now even more desirable as a result of upgrades for 2019 with a refreshed look and more safety equipment as standard.

For improved safety, all 2019 models have Autonomous Emergency Braking (AEB) as standard to help avoid collisions, Lane Keep Assist and Lane Departure Warning. A new 8-speed sequential automatic transmission has also been fitted to all diesel models which replaces the 6-speed transmission in the previous diesel variants.

The new transmission was specially designed for diesel engines and provides a smooth delivery of power throughout the rev range, perfectly matching the torquey 400 rpm character of the 2.0 CRDi unit for a more rewarding drive, as well as improving fuel consumption.

Following its launch in 2016, the Kia Sportage has become one of the most successful vehicles in the New Zealand market, often leading the popular medium SUV segment with its dynamic street appeal.

The styling has been improved with the introduction of the 2019 Sportage, through horizontal bars cleverly integrated into a bolder front end. An enlarged air dam and arrow-shaped side light clusters, along with a newly designed trademark Tiger Nose grille. The GT Line model is even more prominent thanks to new LED headlights, new X-wing LED daytime running lights and Stinger-style LED indicators.

The sporty image is further lifted with new 19” wheels for both the EX and GT Line models and new 17” alloys for the LX, while the rear tail-lights have been redesigned to sharpen the unique Sportage DNA. The rear bumper follows the design direction of the front with a horizontal trim splitting the rear indicators and reflectors.

Inside, the roomy and welcoming 2019 Kia Sportage cabin has received a series of upgrades, including new upholstery designs for the LX, with composite leather for the EX and GT Line models.

A new frameless 8” touchscreen for the audio system has been added to the dashboard in the GT Line, with a 7” inch version in the LX and EX models. Climate Air Conditioning is now fitted across the range. The diesel and 2.4 petrol AWD GT Line models also get a panoramic sunroof with the upgrade.

The popular 2.0 litre MPI and 2.4 litre GDi petrol engines remain unchanged and both are matched to the 6 speed automatic transmission. The existing on-demand All Wheel Drive system fitted to selected EX and GT Line models also continues unchanged, as does the front drive system on the other models.

The 2019 Kia Sportage model line-up has been further refined for the New Zealand market, with the Limited model being phased out and a new 2.0 GT Line Urban added to the range.

One significant change undertaken for the New Zealand and Australian markets has been the development of specific suspension settings for individual models in the Sportage range. The suspension components chosen are unique to this region and are the result of a stringent testing regime conducted under the ANZAC suspension programme.

By selecting suspension settings to suit each of the three model lines, Kia says that Sportage owners can now choose the model that better suits their driving preference. Buyers of LX and EX petrol models will find their vehicles provide a softer and more comfortable ride. The top-range petrol GT Line is tuned more towards sportiness, delivering a firm but, agile ride with more athletic and engaging handling. Meanwhile, diesel models exert a compliant and rounded ride and handling that is also athletic and engaging.

Overall, Kia says that compared with the outgoing model the 2019 Sportage rides better, is more responsive in its steering and has a superior ability to soak up the highway and secondary road undulations, as well as being supremely comfortable in town and city environments. And it’s quieter than its immediate predecessor.

The new 2019 Kia Sportage is now on sale in New Zealand from $35,990 plus on-road costs and, like all new Kia passenger vehicles, it comes with a 5-year / 100,000km warranty package, including 24-hour roadside assistance.