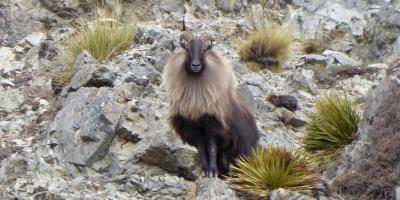 DOC’s proposal to kill 17,500 Himalayan tahr over the next 10 months is rushed, based on slender evidence, and could spell the demise of a unique and valuable trophy herd, says NZ Deerstalkers’ Association spokesman Bill O’Leary.

“The numbers they want to start killing within the next fortnight have been set without a proper assessment of the situation, and there is no attempt to leave the most valuable animals – the bull tahr that can take 8 years to reach their trophy potential. More time needs to be spent setting terms and conditions for the cull rather than just rushing in and killing everything on sight without considering the consequences.”

DOC’s population estimate of 35,600 animals was largely based on controversial methods of assessing the numbers by pellet counts, he said. “There is no general agreement among game animal scientists as to the accuracy of this method, and DOC itself admits that its estimate has a margin of error of up to 9,000,” he said. “We acknowledge that tahr numbers are above the level set in the 1993 Thar Plan, and some carefully planned, highly selective culling needs to be done – but better data and more detailed planning are needed rather than killing so many tahr with undue haste.”

A herd of 10,000 tahr left after unselective culling would not be able to provide a sustainable harvest of trophies, he said. “At that level there would be about 5,000 male tahr left, of which only a fraction would be mature animals. To put that in perspective, at present hunting guides alone take about 1,500 trophy bulls per year and private shooters take at least as many again, while more are killed by helicopter hunters too. This adds up to over 3,000 a year – well over half of the available males including young as well as mature animals. At that rate the trophy value of the herd would vanish within a couple of years.

“There is nothing in the DOC proposal to enthuse me,” said Mr O’Leary

More in this category: « Native birds as potential alternative to pesticides NZ's role in the Malaysian plastics dumping ground »
back to top
Mar 23, 2018