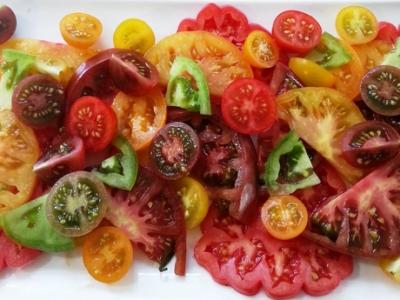 A small New Zealand produce farm, is making some exciting progress with some agroecology projects that could reduce the need for chemicals on tomato farms reports This email address is being protected from spambots. You need JavaScript enabled to view it. for FreshPlaza.

The Curious Croppers, mainly produce tomatoes on a small scale, but are spearheading a Tomatoes NZ project, called the NZ Agroecology Initiative. Owners Angela and Anthony Tringham say they have been planting weeds from seeds, and are experimenting with some new methods that some of the larger farms cannot do.

"A lot of the stuff that we are doing, is taking leap of faith," Angela said. "A lot of the big growers, like the really big growers, they cannot do our leap of faith, because we are a really small grower, we have got the freedom and it just us. We don't have shareholders or a board of directors. The board of directors is just me and Anthony- and we just sit down and have a glass of wine together and ask each other should we do this - and if anything dies, that is just our problem. The corporates need to be more conservative. That means we can test ideas, and we want to have fun with it."

The family live in Clevedon, South Auckland in a 150-year-old farmhouse. As they do not grow in the soil, they cannot be certified organic, but the aim of the Curious Croppers is to use the absolute minimum amount of chemicals, and grow lots of weeds that are specifically targeted to introduce certain predators.

"What that means is we don't have to weed anything," Anthony said. “In the old days when we got taught about Integrated Pest Management (IPM), it was sort of like a slash and burn IPM where you tried to have everything dead outside, or short grass, and when you had a pest problem, you would introduce a specific creature to keep it under control. So, it's like using IPM like another form of pesticide, and slowly we are evolving to a more complicated eco-management system. It is basically taking hunches and putting the science behind it."

Anthony, who is also on the board for Tomatoes NZ, says that the organisation has employed a PHD student to oversee the project, with the support of industry levy funding. It is already showing good results; last year the agroecology program had the best year ever for insect control.

"This was the year that we let the whole farm go wild, and there were a terrible amount of weeds growing up to the edge of our greenhouses," he explained. "So, it is a slapdash, let's try lots of things and see what works approach. Last year the place looked shoddy, but our insecticide applications were minimal. We had zero whitefly problems and only TPP towards the end. We also found that we were getting native bio-controls.”

For New Zealand tomato growers, Anthony says Tomato Potato Psylid (TPP) is the number one pest, which is also in Australia. The NZ outdoor tomato industry, which mainly was producing for processing, went to a spray free program but were decimated by TPP because they had no protection. The Curious Croppers were also one of the first farms in the country affected by the pest.

"Everything else we have got the controls for, but for this one we are working on how to suppress TPP numbers using natural controls," he said. "As an example, we are interested in Solanum nigrum at the moment - a lot of people hate that because it is an herbicide resistant plant that drives pea processors nutty because the black berries get in the pea processing. But we suspect it is a really good producer of a tiny type of mite. So, we have a shortlist of around 10 naturally occurring predators that will eat TPP so we are working on what we need to do to encourage them."

Some of the other principles they are using, according to Anthony, come from other industries such as the grape industry, which had a problem with light brown apple moth. It was discovered by using buckwheat phacelia and lithium every tenth row, they supply enough nectar that when the predators come in they have got carbohydrate to keep them alive and just by doing that suppress the population.

Anthony says that it is important to do this research now, to get "to where you need to be, before you need to be there", as insecticides will one day be phased out completely.

"What happens with insecticide is you can get away without it in greenhouse growing, but then you have potato growers in a different category all together" Anthony said. "They go mad with it because they are outdoors and vulnerable, and then all the insects get resistant to the outdoor application. That's the tomato growers worry. So, if there were no potatoes grown outside then tomato growers might use 1-2 insecticides. But it's something we are fortunate about that we don't have any potato growers near us.

A Tribute To Our Heros