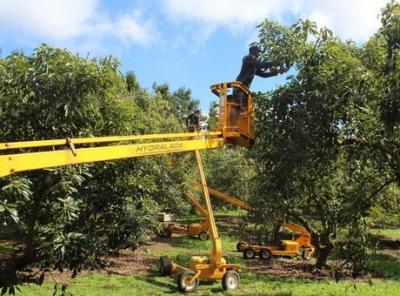 The global demand for avocados is driving a crime wave in New Zealand’s Bay of Plenty, where orchards line the state highway heavy with fruit, and are largely unprotected. Avocados will be sold on the black market for a dollar apiece and thieves can easily pick thousands of dollars’ worth of fruit in one night. As demand has soared, gangs with links to organised crime in the

On the back of the fruit’s trendy reputation –and its popularity with millennials– New Zealand’s industry is undergoing a phenomenal growth spurt, rising from a net worth of NZ$70m in 2013 to NZ$198m in 2017.In the off-season, avocados can sell for NZ$7.50 each in New Zealand supermarkets. But the avocado has become a victim of its own popularity, forcing farmers to take the law into their own hands to protect their crop.

“We’ve been working on the scarcity principle driving demand, but that’s backfiring a bit now,” says Ron Bailey, an avocado grower in Te Puke told The Guardian. “People have been intimidated and attacked; it’s got a fair amount of scale behind it now. There’s a growing nervousness among growers. The thieves are getting bolder and pushing the limits.”

Night watches and tripwiresThere is no reliable data on the number of avocado thefts in New Zealand because police do not differentiate the fruit from other produce thefts, but anecdotal evidence suggests the crime is becoming more widespread and common.

At least two people have been attacked by thieves on their orchards this season, and dozens of overnight raids have taken place on farms. The raids have been largely confined to the Bay of Plenty, though one Northland grower had 70% of his orchard pinched at a cost of NZ$100,000, according to reporting in the local press.