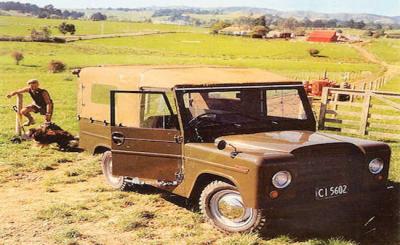 Forgotten deal relied on common sense instead of currency

The advent of New Zealand’s only branded home-grown vehicle the Trekka 50 years ago was the result of a counter trade, a barter, that even today is still staggering in its simplicity. Indeed, the sheer scope of the barter even today is still unrecognised just because it was so straightforward.

New Zealand had a surplus of wool.

Czechoslovakia’s Skoda Works had a surplus of vehicles.

Until this moment it has remained a secret. We will now reveal how it worked out in practice.

The organisation to see the opportunity was Motor Holdings of Auckland. The company in that era decided to run the deal through an offshoot in Palmerston North known as Five Star Motors.

In those days 50 years ago Palmerston North was an important centre of the auto industry in terms of assembly and distribution.

It was now that the government was approached with the outline of the deal.

The reason that a government approval was necessary was that at this time any import of any kind at all was controlled by quota and licence.

But still the government sought to squelch the deal on the grounds that the barter or counter-trade was simply a device to by-pass the rigid import licencing of that era.

But Five Star motors had a trump up its sleeve which it now played carefully.

Fifty percent of the showroom floor price of the New Zealand-ised Skoda would be local input.

The skill and patience of the Palmerston North negotiators who implemented the Trekka counter trade had much to do with Palmerston North’s presence as a swinging parliamentary seat between National and Labour.

The rest of the story is relatively well-known. The Trekka, which looked like a boxier version of the Land Rover was one of the cheapest vehicles available in a market where new car prices were high, and cash deposits of up 60 percent were mandatory.

Better still, the Trekka, a forerunner of the SUV, was available off the floor, on low deposit, making new car ownership accessible to many for the first time.

The Trekka though will be remembered as the most successful counter deal ever. Its success was in its simplicity.

The most curious thing about it was that it was so hard to repeat as New Zealand trade began to turn eastward. In spite of Asian customers being notoriously and institutionally bad payers – another topic still rarely talked about, especially departmentally—it proved a hard act to follow.

In our next revelation on the silent, and officially-ignored world of counter-trades, we will detail an example of one that did not work out and very largely because of the absence of official support.

More in this category: « New Zealand exports to S.Korea up in first year of free trade agreement 1st NZ economic delegation to visit Iran next week »
back to top
Sep 19, 2018