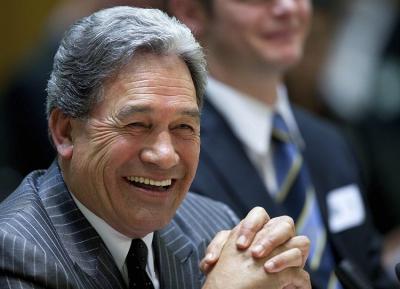 New Zealand’s Ministry of Foreign Affairs & Trade stands out as the obvious and logical destination for Winston Peters MP in the country’s pending new Parliament.

It combines for Mr Peters the correct blend of high office and of practical power that he requires in the current Parliamentary re-shuffling.

Under New Zealand’s proportional representation system the mix of seats and percentage vote share that his New Zealand First Party achieved leave him as the make-weight in the practical outcome of the general election..

There are two key factors that make MFAT (pronounced M-Fat) as the ministry is rather clumsily described the obvious choice.

The current minister Gerry Brownlee MP holds is essentially as a caretaker whose trouble shooter role has now been amply discharged.

Mr Brownlee will not complain if he is reassigned.

Mr Peters believes that it is over focussed on the East, and notably the Middle East, and to the exclusion of markets in the NATO zone.

It is this trade aspect that dovetails neatly into his recent championing of the New Zealand farmer.

His Farmer First positioning was characteristically aimed at his own base.

New Zealand First votes come from traditional National Party supporters who become exasperated with National’s constant tempering of its policies to accommodate the ideological wing of the Labour Party, and only to a slightly lesser extent, the Greens.

The wisdom of Mr Peter’s pro-farmer stance was based on the confusion National has sown with its stance over water.

The National government allowed the whole vexed picture to become hopelessly muddied between the proven danger of agribusiness effluent intruding into potable water at one end; and on the other the vogueish clamour against the export of water in any form.

Mr Peters will not be an entirely welcome figure at the helm of MFAT.

On its diplomatic side, the department listened to the wrong people in the matter of the outcome of the United States presidential race.

It failed to give guidance correctly over the outcome with some embarrassing results.

Among these in practical terms was the New Zealand temporary contingent on the UN Security Council backing the censuring of Israel, a step that alienated National’s staunch support among urban fundamentalists.

Mr Peters is at home with protocol and is familiar with the Foreign Ministry.

Such a role would allocate him the prestige he seeks along with the exposure to ensure that everyone sees that he has it.

He will not wish to get himself tied down in one of the nuts and bolts ministerial departments of the type that will be required to implement several of his high profile announced policies.

These include the referendum on the existence or otherwise of the Maori seats.

Also the broader-based one on trimming the volume of members of parliament which are often viewed as proliferating.

More in this category: « Presidential acclaim in United States for New Zealand Citizen-Soldier Hero Odyssey Traveller Veers Off the Beaten Track With Bespoke Knowledge-Seeking Expeditionary Tours “Beyond Sightseeing” »
back to top
May 03, 2018