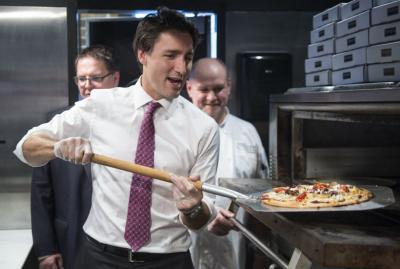 Most of the office holders in New Zealand’s ruling Labour Party, including trade minister David Parker, had actively campaigned against it when it was the pet project of the former National government.

Deputy prime minister Winston Peters whose New Zealand First Party is the minority coalition member had consistently let it be known that he favoured instead a restoration of the UK-led preference era.

Canada’s withdrawal from the original TPP allows the New Zealand Labour-led coalition government to have the best of all worlds.

New Zealand has long been engaged in what amounts to free trade negotiations with Canada on carefully selected sectors in aerospace and marine advanced technology.

The collapse of the TPP means that New Zealand now can sidestep the ill-will stemming from even the merest hint of suspicion that its milk exporters might be treading on the gumbooted feet of Canada’s Quebecois dairy industry which is more protected than the crown jewels.

Canada was never keen on the TPP and from the outset saw it as a defensive move to preserve cohesion with the Washington Concensus, the string of post World War 2 alliances centred on the United States.

When President Trump ordered the United States out of the TPP, Canada’s enthusiasm for the scheme began to evaporate even more rapidly.

Premier Justin Trudeau did not become the international poster-boy for presidents and prime ministers everywhere without understanding that the most effective way of avoiding a disagreement is simply to absent yourself from the forum at which the disagreement will occur.

His slick piece of gamesmanship sidestepped the unwanted TPP participation confrontation and allowed the assembled the time they needed to digest the fact that there would be no Canada and thus no TPP.

To drive home the blunt message from this display of legerdemain he then caused his trade minister to drive home the message via a tweat stating that “despite reports, there is no agreement in principle on TPP.”

The result swiftly followed with the slimmed down, sans United States, and now Canada, version of the TPP being re-named the Comprehensive and Progressive Agreement.

In the event, New Zealand premier Jacinda Ardern gave the appearance of anticipating all this when she emphasised from the rostrum at the conference the importance to it of climatic cooperation.

Miss Ardern thus also appears to have foreseen the future of this freshly hatched Progressive association which will be as a forum and meeting point on exactly such ethical moral issues as the climate one.

If Miss Ardern felt any relief at the outcome of the gathering, then she skilfully hid it.

The protest outside the original Auckland TPP signing ceremony stage-managed by the previous National government was an ugly affair.

Most of the participating protestors if in fact they were voters were face-value Labour voters.

The abandonment of the original TPP, the one that was the subject of the preliminary Auckland ceremony, means that Miss Ardern now sidesteps exactly the type of internal doctrinal party schism that in the past has proved so damaging to the Labour Party.

In the meantime New Zealand can enjoy its favourable trade balance with Canada and keep sending out the beef and the wine and receiving in return electronics, machinery, and of course the pork.

More in this category: « Washington Post Extremist – Racist Smear of New Zealand’s Labour-Led Coalition is in fact a Cynical Marketing Thrust Amazon’s Tolkien Television Rights a Surprise—TV thought to be wrapped in original NZ Lord of Rings Film Deal »
back to top
Nov 11, 2018