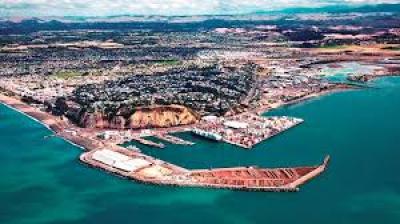 Dec 12, 2017  -  A record 4.754 million tonnes of cargo crossed the port’s wharves in the year to 30 September, up from 3.916 million tonnes in 2016. Container volumes grew 12% to a record 288,444 TEU. Log exports also hit a new high, with 1.63 million tonnes exported through Napier – a 35% increase on last year’s record. Napier Port has released its annual results for the 2017 financial year, reporting record cargo volumes and a strong financial result.

“It’s been an historic year for Napier Port,” said Chief Executive Garth Cowie. “We faced a major challenge in the wake of the Kaikoura earthquake, and I’m proud of the way our people stepped up.

Napier Port saw a significant and unexpected spike in cargo following the quake on 14 November 2016, as containers were rerouted to Napier.

“Essentially, we saw six years’ forecast growth in one year. The release of our annual results is a chance to reflect on the magnitude of that feat. Absorbing that level of unexpected growth without compromising safety or service is a big task, but our people took it in their stride. It’s a real testament to the calibre of our people and our culture.”

It’s not the only major feat for the port this year. The Ovation of the Seas’ maiden call on January 5th saw the giant liner break the record for the largest ship ever to berth at Napier Port.

“We’ve had a fantastic cruise season, and the Ovation’s call was undoubtedly the highlight. It really showed what we’re capable of achieving, and it was great to have such strong support from our tourism partners and our local community.”

The port’s onsite packing facility, Port Pack, also continued its growth trend this year, with 48,310 TEU containers handled over the course of the year.

“Port Pack now accounts for nearly a third of Napier Port’s containerised full export throughput, and has grown into one of the biggest packing facilities in New Zealand.”

Napier Port delivered an exceptional financial result, reporting a record $16.7 million net profit after tax, up 46% on last year, while delivering $10.7 million in dividends to its sole shareholder, the Hawke’s Bay Regional Investment Company. It invested $18.7 million in capital projects and equipment, including land holdings in Pandora and Whakatu and specialist studies to support its application for resource consent to build a new wharf.

The resource consent application for its proposed 6 Berth Development and Dredging Project was submitted to Hawke’s Bay Regional Council yesterday, and is a crucial element in Napier Port’s future strategy.

“Hawke’s Bay’s economy is in growth mode, and we’re forecast to see cargo volumes nearly double over the next decade, while ship size is also forecast to grow. Having a sixth wharf in place will strengthen our connection to global markets and ensure Hawke’s Bay can continue to thrive and maintain its enduring relevance.”  View the full report here.