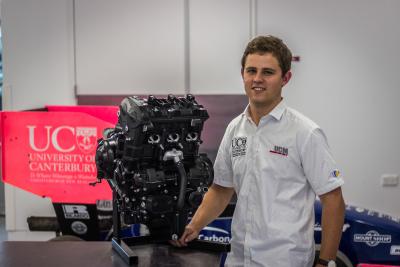 UC Motorsport team principal Jacob Ewing with one of the Triumph Daytona 675R engines that the students will be using to build their Formula Student race car. University of Canterbury

A team of University of Canterbury (UC) students, rated amongst the best in the world in Formula Student motorsport, has signed a generous sponsorship deal with world-renowned Triumph Motorcycles Limited.

A world ranking system is maintained by the Formula Student organising group in Germany, which takes into account the performance of teams at all Formula Student motorsport events around the world. This year the UC Motorsport team has been ranked third in the combustion engine class, out of 556 teams.

The exceptional performance of the team attracted the interest of Triumph Motorcycles Ltd in the United Kingdom, which has recently finalised a generous sponsorship deal with the UC student motorsport team.

Triumph will supply the team with ultra-high-tech three-cylinder engines and parts that are similar to those it will supply for the Moto2 grand prix motorcycles from the 2019 season onwards.

While the UC Motorsport team enjoys strong sponsorship support from local companies, until now the students have not had a direct relationship with a company which manufactures engines.

The team principal Jacob Ewing, who is studying for a Bachelor of Commerce degree at UC, is excited about developing this new relationship for the team.

“We compete against European teams that are sponsored by big names like Red Bull, AMG Mercedes, and Porsche. This deal ensures we can go toe-to-toe with them.” Jacob says.

“Triumph is a globally respected engineering powerhouse, showing the way for even the big Japanese manufacturers like Honda that were dominating just a few years ago. Their engines are small and light, but make huge torque, which is exactly what you want in a motorcycle or in a very light race car like ours.”

“When my students told me about the sponsorship deal they had made with Triumph, I thought they were giving me a wind-up. Wooden crates filled with brand new engines arriving from the UK confirmed they weren’t kidding.”

The team has completed the design of their new car which will use the Triumph engine, and is on a very aggressive schedule to show what it can do at the next competition this December in Melbourne.

Similar to other forms of motorsport Formula Student is unique in that only university students can compete and they must completely design and build their own cars.

In multiple events held around the world each year, more than 600 of the best university teams compete both on the race track and in a range of off-track events which test the depth of the students’ knowledge in engineering, business and management.

UC students have been competing internationally for the last five years in Formula Student, with a new group designing and building a brand new car each year. The team builds technically advanced cars made from carbon fibre exactly as F1 cars are produced, using the latest electronics and software, both in the design stage and to assist the driver to get the best from the car on the track.

More in this category: « Crossing the Finish Line with a Digital Twin McLean Park returf ready to roll »
back to top
Mar 12, 2018