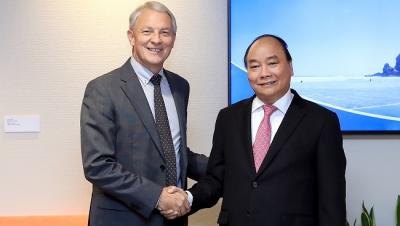 The Vietnamese PM made the call during a meeting with Mayor of Auckland Phil Goff following his arrival in the city on March 12, as part of a three-day official visit to New Zealand at the invitation of New Zealand PM Jacinda Ardern.

PM Phuc expressed his delight at the strong development of Vietnam-New Zealand relations over the recent years, which have seen active contributions from both countries’ localities, including Auckland.

He voiced his belief that with its advantages, Auckland will continue to expand its cooperation with Vietnamese localities, helping to raise the comprehensive partnership and good relations between the two countries to new heights.

The PM asked the mayor and authorities of Auckland to continue creating favourable conditions for the Vietnamese community living, studying, and working in the city, thus contributing to the development of Vietnam-New Zealand relations as a whole.

He expressed his pleasure that Auckland is attracting a large number of Vietnamese people to live, study, and work, while speaking highly of the contributions of the Vietnamese community to the development of Auckland.

More in this category: « NZ seeks exemptions from US steel and aluminium tariffs US Customs plans a new e-commerce strategy »
back to top
Mar 02, 2018