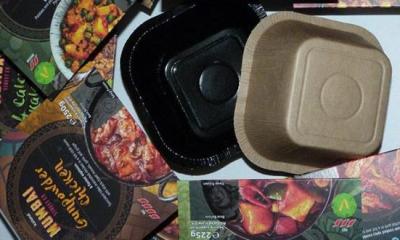 Iceland Foods has launched two new major product ranges for the ready meals market packed in Stora Enso paperboard trays.  With its 900 stores, Iceland Foods accounts for 30% of frozen ready meal sales in the UK, and the business is growing.

Stora Enso has claimed that until “now ready meal trays have been mostly made of black plastic”. It also argued that black plastic isn’t being recycled. The material hit the headlines in 2016 after it was revealed that black trays aren’t being recycled due to a colourant that isn’t being detected by recyclers. Carbon black makes the trays invisible to sorting machines and over 1bn trays a year are sent to landfill or incineration.

Ian Schofield, own label and packaging manager at Iceland Foods, said: “We are moving away from plastic. We have now launched our new Mumbai Indian street food range in paperboard trays, which are fit for purpose and sustainable in every way. Sustainable forestry and an environmentally sound production process, largely run by bioenergy, make paperboard a sustainable choice, and it is also recyclable in the paper stream when rinsed well. This is a very big launch, especially the street food range, which includes 18 lines. The products are sold in all our stores.”

Besides being sustainable, the board for ready meal packaging must be formable to different shapes and sizes, food-safe and suitable for cooking at high temperatures in ovens and microwaves.

Trayforma by Stora Enso was used to manufacture the trays by Southern Cross Packaging.

Karin Edwards, sales manager at Southern Cross Packaging, said: “We have invested over £500,000 in new tooling and production lines in the past four months to be ready to support retailers such as Iceland Foods with the move to more sustainable and widely recyclable packaging.”

Schofield added: “When we start new product development, we must integrate the packaging development into the process. With food producer Authentic Food and Southern Cross Packaging, it took only seven months from kick-off to store, with a completely different type of package. And the outcome is brilliant.”