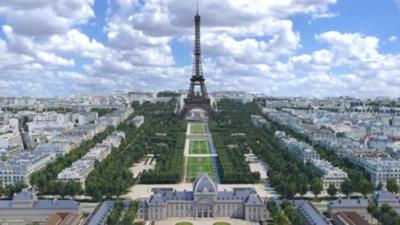 Since its entrance into the 1889 World’s Fair, the Eiffel Tower in Paris, France, has become one of the globe’s most recognizable landmarks. Now, the wrought iron structure and its surrounding area are going to be undergoing a 21st Century makeover aimed at recapturing the imaginations of tourists and locals alike, thanks to building information modeling (BIM) and other technologies.

In time for the 2024 Summer Olympics, Paris plans to change the way people experience the Eiffel Tower. (Image courtesy of Autodesk.)

At BIM World 2018, Autodesk announced that it is partnering with the City of Paris to renovate aspects of the Eiffel Tower and the Champ de Mars on which it sits using BIM. To learn more, we spoke to Nicolas Mangon, Autodesk vice president of AEC Strategy & Marketing.

Named for Gustave Eiffel, the engineer whose firm designed and built the tower, the Eiffel Tower attracts nearly 7 million visitors who ascend it annually and almost 30 million who take photos from outside the structure, making it the most visited paid monument in the world today.

However, Nicolas Mangon, from Autodesk, pointed out that most of these visitors are tourists and not local Parisians. Additionally, Paris is about to host a slew of major events, including the 2024 Summer Olympics, the 2025 Universal Exhibition and the 2026 Rugby World Cup.

Cadpro for Autodesk in New Zealand

Published in CADPRO SYSTEMS
Tagged under