Government Boxing Hesitation Symptomatic of Continuing Inability to Say “No” 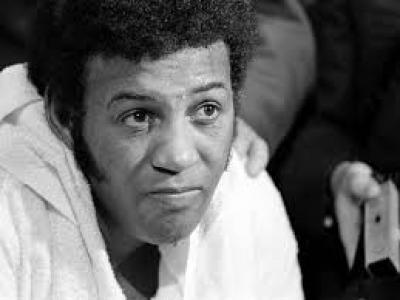 When Muhammad Ali visited New Zealand even boxing aficionados failed to recognise his traveling companion Jimmy Ellis (pictured) the former champ. Ellis shrunken in size and bent over we know now was then in the grip of dementia pugilistica.

Muhammad Ali was shortly afterward himself to start succumbing to the effects of his pugilistic career.

The willingness at the end of last year for government cabinet members even to entertain the notion of public funds being devoted to a professional boxing spectacle in Auckland implicitly supported the promoters.

It gave tacit encouragement to an activity dedicated to causing human injury and so also creating an unnecessary drain on public health funds.

It was announced that the Joseph Parker heavyweight boxing match was “borderline” for government funding according to economic development minister Steven Joyce ..

The National Government is under constant assault from the well-funded whistle-blower Taxpayers Union for unnecessary or frivolous spending.

Boxing spectacles obviously fall into this category. This should have been stated at the outset.

Boxing is the only permitted activity in which one participant deliberately seeks to inflict injury upon the other.

Frank Bruno another former champ and suffering from the effects of repeated blows to his head has had this said of himself:-

“Bruno was known for his excellent punching power: he won 40 of his 45 bouts and 38 by knockout, giving him a 95% knockout rate from the fights he won; his overall knockout percentage is 84.44%.”

These “knockouts” amount to an impact paralysis and seizure of the brain, the body’s most delicate component, and which in a free state cannot support its own weight.

The failure of the government to swiftly state that no public funds under any circumstances would be devoted to this activity only added to an increasing suspicion that the government is unable to say no to anyone on anything at all.

Jonathan Coleman is a medical doctor.

The promoters had said they needed a decision in a few weeks. Normally the Government would take a couple of months to assess an application, but it had moved more quickly in a couple of cases, Mr Joyce obligingly indicated.

With its immense public relations apparatus at its disposal none of these appears to have weighed up the pros and cons of some supporting materials for the benefit of the public at large.

A background communique could have said for example that the American Association of Neurological Surgeons claims that 90 percent of boxers suffer some kind of brain injury while boxing.

Because of these brain injuries, the surgeons claim, boxers are more prone to mental deterioration during their later years that can lead to Parkinson’s or Alzheimer’s.

Instead the burden of the government’s argument against dedicating public money to the boxing spectacle was that it was a private enterprise corporate promotion and therefore run for profit and therefore did not qualify for a hand-out.

Petrified into silence for fear of being seen as remotely anti sport, the mainstream media stood aside from deliberations.

The episode again starkly reveals the need for a samizdat boom-lowering voice such as that of the Taxpayers’ Union, an organisation whose disclosures consistently stand up, unrefuted.

|  From the This email address is being protected from spambots. You need JavaScript enabled to view it.  |  Thursday 2 February 2017  ||

More in this category: « Employment Relations Authority appointment General Election to be held on 23 Sept, 2017 »
back to top
Mar 12, 2018