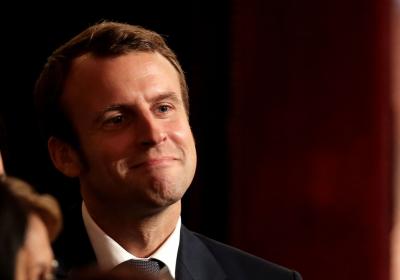 Only age and hemispheres separate the identical twins of Social Democracy

Slight of build and with their perma-grins they even look alike. The two clever sticks share similar backgrounds, give a zig-zag or two.

Mr Macron is from a wealthy professional family and he went into the Socialist Party.

Mr Key is from a working background and he went into the conservative National Party.

Both made their name and fortunes in big name investment banking, Mr Macron with Rothschild. Mr Key with Merrill Lynch.

Both displaced in their upward trajectory seemingly permanent institutional figures.

Both seem from a very early to have seen their destiny in politics. Both in their different ways are dedicated family men.

A notable difference here being that Mr Macron did not have to wait for acceptance by an established party, and simply unwrapped his own, En Marche.

Both Mr Key and Mr Macron are anything but dreamers. Their ascent is a product of their ability in the sphere of risk assessment: constantly calculating and weighing up the probabilities in the options before them.

Both understood the value in Napoleon’s dictum to the effect that those of high ambition and ability ascending the ranks do well to conceal their field marshal’s baton.

Mr Macron pulled out his baton a year ago when he suddenly resigned as President Hollande’s economics minister and went out on his own with his own party France En Marche which is best translated as France on the Move.

His calculation was that all the existing parties had lost their appeal and he has just been proved right as the Republicans were swept aside and the ruling Socialist Party hardly figured at all.

Mr Macron’s calculation can now be viewed for what it is. He has cleared away the clutter of parties from the landscape and has left the electorate with two clear options in the form of the National Front or his own En Marche.

En Marche is essentially a Gallic version of Tony Blair or John Key’ middle way, with its accompanying flexible and inclusive policies.

Like his Oceania avatar John Key, Mr Macron keeps his options open, preferring to give the impression that he will deal with the problems as they are encountered instead of sweeping them away with a ruthless doctrinal broom.

In Mr Macron’s inclusiveness will be his biggest operational problem. In sticking to the EU he must also adhere to the Euro currency.

The shackling effect of this uniform currency is often considered to be the chain that binds and which explains why the Eurozone is taking so long to recover from the United States-induced bank bust.

Mr Macron might now be putting a probe into Mr Key’s stewardship of his economy which recovered so quickly from the same event that it seems a miracle that the nation did not succumb to a collective bends.

Mr Key personifies an entire anthology of French proverbs to the effect that the cleverest thing a clever person can do is to conceal how clever they in fact are.

He has simply quoted the Economist’s “rock star” economy value judgement on the success of his government.

Mr Macron meanwhile being from a Mediterranean nation does not have this need for public modesty and can let his light shine forth.

More in this category: « New Zealand supporting dam safety in Vietnam New Ambassador to France appointed »
back to top
Oct 11, 2018