Commentary: The elephant in the room at the NAFTA talks 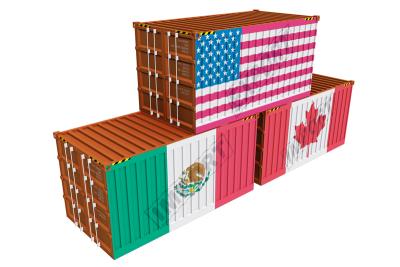 The first round of long-awaited talks on modernizing NAFTA finished Sunday, with Canada, Mexico and the United States issuing a statement that they had made "detailed conceptual presentations" of their positions. Negotiators from the three countries will meet again in Mexico on September 1 to continue trying to revise the trade pact. But while all say they are keen to see a new deal emerge, they still have to navigate the political risks attached to any commercial agreement.

Donald Trump´s promise to renegotiate trade deals was a key plank of his "America First" campaign platform. One of his first acts in the White House was to withdraw the United States from the Trans-Pacific Partnership (TPP) with countries in Asia-Pacific and the Americas, including Australia, Canada, Chile, Japan, Malaysia, New Zealand, Peru, Singapore and Vietnam. Meanwhile, negotiations between Washington and the European Union for the Transatlantic Trade and Investment Partnership (TTIP) have not resumed since Barack Obama left office.

Speculation now centers on the future of the North American Free Trade Agreement, typically seen by many economists as at least a qualified success story. Since 1994, trade between the United States, Mexico and Canada has more than tripled, forming a trading bloc with a combined GDP of around 20 trillion dollars.

However, prominent representatives of both the left and right, from Bernie Sanders and Ralph Nader to Ross Perot and Pat Buchanan, have long criticized the agreement for contributing to a hollowing out of the country´s manufacturing industry and lost U.S. jobs, partly because of increased trade deficits with Mexico and Canada. Right-wingers also accuse NAFTA of undermining U.S. sovereignty and opening up the United States to what they see as an increasing threat from drugs, crime and immigration from Mexico.

From a different standpoint, even some previous advocates of NAFTA have become less enthusiastic about the deal. This is partly because the three countries have been unable to fully address challenging issues like tightened border security.

NAFTA is also seen to have stalled because Mexico, Canada and the United States have increasingly preferred to push bilateral solutions rather than addressing opportunities and problems trilaterally. A key rationale for the prevailing lack of triliteralism in the continent is that the NAFTA architects from Canada and Mexico wanted to curb EU-type political institution building they feared would lead to a Brussels-style bureaucracy dominated by Washington.

Equally, Washington has generally disliked the idea of developing any pan-North American political institutions that could rein in U.S. autonomy.

Trump jumped into this cauldron of criticism in the 2016 election campaign by calling NAFTA "the worst trade deal maybe ever signed anywhere, but certainly ever signed in this country." In key electoral states like Ohio and Pennsylvania, his championing of an anti-international trade agenda helped win him significant support last November. (In April, Trump told Reuters that he had been "psyched" to terminate NAFTA, but changed his mind after Canada and Mexico asked for it to be renegotiated instead.)

Many U.S. businesses have urged that forthcoming negotiations should not jeopardize existing market access, and that the key negotiating principle should, in the words of United States Trade Representative (USTR) Robert Lighthizer, be to "do no harm." Now the USTR and the administration must assess exactly how much overhaul is politically necessary to meet the expectations generated by Trump´s statement that "we´re going to make some very big changes or we are going to get rid of NAFTA once and for all."

The renegotiations have high political stakes for Canada and Mexico too. If agreement cannot be reached before the Mexican presidential election on July 1, 2018, negotiators could have to deal with NAFTA skeptic and current poll favorite Andrés Manuel López Obrador. The left-wing populist has positioned himself as a critic of Trump and the U.S. president´s "campaign of hatred" against Mexico since the 2016 U.S. presidential campaign.

Uncertainty over NAFTA, the TPP and Trump´s trade policies in general, could create a significant political vacuum. That, in turn, could give China a gap to exploit - a gap Beijing is waiting to take. Chinese Vice Foreign Minister Li Baoding said last year, "protectionism is rearing its ugly head...China believes we should set up a new plan to...sustain momentum for the early establishment of free trade areas."

Beijing´s alternative vision includes a Free Trade Area of Asia Pacific (FTAAP), a long-term goal to link Pacific Rim economies from China to Chile that has been debated since 2004. In the shorter term, Beijing is also pushing a free trade pact, for which discussions have been underway since 2012, known as the Regional Comprehensive Economic Partnership (RCEP). That would include the 10 ASEAN members plus India, Australia, Japan, South Korea and New Zealand, but not the United States.

RCEP, which is smaller in scope to FTAAP, would create one of the largest free trade zones in the world. Collectively, RCEP countries account for around a quarter of global GDP, and some 46 percent of the global population.

While Chinese President Xi Jinping has asserted that RCEP and FTAAP do not "go against existing free trade arrangements," Beijing and Washington have for years had contrasting visions of shaping the regional order through formulation of NAFTA and TPP on one hand, and RCEP and FTAA on the other. From China´s perspective, RCEP and FTAAP would be more conducive to its national interests.

This is not least because, unlike TPP, Beijing would be explicitly part of the new economic agreements and able to shape their design by creating trade deals with China at the center. Reflecting this, former U.S. Trade Representative Michael Froman has despaired that Washington will now "be left on the sidelines as others move forward."

Continued uncertainty over Trump´s trade stance will only increase the prospects of China taking the lead in the competition for regional trade integration. This will potentially not just consolidate Beijing´s own regional power and its global political and economic influence, but also damage hard-won U.S. credibility with its local and international trading allies. No wonder that many in Washington recognize a lot is at stake in the NAFTA talks, and that a great deal of effort will be required in coming months to see a breakthrough. (Reporting by Andrew Hammond)

More in this category: « National promises boldest-ever trade push Brexit has become a phoney war - and that's dangerous »
back to top
Aug 30, 2018