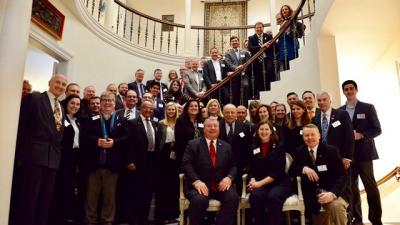 Sydney was the first stop for an Alabama delegation on a trade mission to Australia and New Zealand. (Made in Alabama)

Business and community leaders from across Alabama are traveling in Australia and New Zealand this week, seeking to boost exports and strengthen trade ties in the region.

The 17-member delegation kicked off a series of briefings with U.S. Commercial Service officials in Sydney, as well as appointments with area companies.

Later in the week, the group will travel to Auckland, New Zealand’s primary commercial hub for a similar slate of meetings.

“Alabama has strong, and growing, relationships with both Australia and New Zealand, and we want to build on those bonds,” said Greg Canfield, secretary of the Alabama Department of Commerce, who is leading the delegation.

“This trade mission is about helping our state companies find new markets for their goods and services, so they can create jobs and make new investments in their communities back home,” he said.

Motor vehicles were by far the largest export shipped to Australia in the transportation equipment category.

Hilda Lockhart, director of the Department of Commerce’s Office of International Trade, said Australia and Alabama have a strong relationship in both trade and investment. The free trade agreement with Australia allows Alabama companies to be competitive in this far-reaching market, she said.Members of a trade delegation visit Sydney, Australia, in search of more business for Alabama companies. (Made in Alabama)

In addition, New Zealand is a natural fit for Alabama exporters as some distributors cover both countries.

“As our companies say, it only takes one strong partner to do business here,” Lockhart said.

Also part of the group are representatives from the University of Alabama, the U.S. Department of Commerce and the Mobile Area Chamber of Commerce.

“This trade mission is comprised of multi-industry companies ranging from automotive, aerospace and high-tech equipment, which are among some of the best industry sectors for both Australia and New Zealand,” Lockhart said. “Both countries are very receptive to U.S.-made products because of quality and service.”

As on all trade missions, the Commerce Department has partnered with the U.S. Department of Commerce Foreign Commercial Service to set up prequalified appointments to identify potential buyers and distributors.

“The companies with us are working to grow their international footprint in new markets, and we feel very positive that they will be successful on this trip in doing so,” Lockhart said.

Irrigation Components is changing its distribution model and looking for new distributors after many years of operating in Australia and New Zealand, said Ramsay Geha, vice president of international sales and a member of the trade mission delegation.

“Export sales are about 40 percent of our business,” Geha said. “Export was what established our company, and we are seeking to revitalize and strengthen this portion of our business.”

“Despite having worked on very large industrial construction projects in Australia, we have done so on behalf of U.S.-based contractors and have never worked directly with any Australian or New Zealand-based companies,” said Robert Fuqua, the company’s president and CEO. “We believe that having a more established presence in the region will open doors for more opportunities to provide value to local construction contractors.”

“We are always looking for innovative industrial construction companies to whom we can deliver value through our proprietary materials readiness solution, Jovix,” Fuqua continued. “Companies who are prone to technology adoption are prime for our solution, which focuses on increasing craft productivity and schedule adherence through material readiness.”

Presently, Jovix is deployed in four countries, and exports account for more than 65 percent of Atlas RFID’s annual revenue.

“We have previously participated in trade missions to China, Hong Kong, Norway and Sweden. These trips have provided great value by aiding us in learning about the local business ecosystems and allowing us to create lasting relationships within those markets,” Fuqua said.Austal USA launches the future USS Omaha from its shipbuilding facility in Mobile. The Australia-based company is one of south Alabama’s largest employers. (Austal USA)

Meanwhile, the state imported $106.5 million of goods from Australia in 2016.

Other key ties between the state and the country include Australian shipbuilder Austal USA, which has a major manufacturing operation in Mobile.

For New Zealand, Alabama ranked as the No. 1 trading partner in exports of pulp, paper and paperboard mill products, and the state was No. 2 for exports of resin, synthetic rubber, artificial and synthetic fibers, and filament.

This story originally appeared on the Alabama Department of Commerce’s Made in Alabama website.

More in this category: « McClay – China FTA upgrade worth thousands of jobs McClay – NZ-EU FTA to be fast-tracked »
back to top
Jun 18, 2018