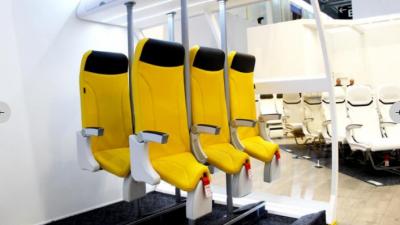 There’s nothing inherently bad about the design of the Skyrider 2.0, a new compact seat that allows airlines to fit more passengers in less space with a hypothetical super-economy class.

Engineered by Italian aerospace interior design company Aviointeriors and introduced at Hamburg’s Airplane Interiors Expo in earl April, the seat positions a willing passenger almost completely upright on a polyester saddle and back support. It seems well thought out, it’s reportedly very functional, and it even looks good. But I’ll still never sit on one.

The Skyrider 2.0 makes a lot of sense for airlines trying to squeeze as much value as they can from every pound of fuel and inch of cabin space. Decreasing seat space is an easy way to do so, and even major companies like Airbus have toyed with unconventional seat designs like this butt-destroying bike seat. The new saddle-style seat is a twist on the company’s previous high-capacity seat prototype, which came out in 2010 and was never installed by any airline–perhaps out of fear after the backlash Ryanair received for similar plans. This new version is an aesthetic improvement over the original (which looked like a squeezed version of a normal seat), but it seems to be more clever, as well: positioning a passenger almost upright, with a saddle and a foot panel to support part of their body weight, takes up only 23 inches of pitch (“the space between a point on one seat and the same point on the seat in front of it”).

Aviointeriors calls Skyrider 2.0 “the new frontier of low cost tickets and passenger experience” and claims that the design allows a 20% increase in passengers per flight. It also weighs 50% less than standard economy class seats–after all, it’s half the size–lowering the fuel cost per passenger. So it seems likely that such a design could lower the cost of travel for consumers–but at what price when it comes to the experience?

A reviewer at the travel review site The Points Guy tried one at the expo, spending 10 minutes in versions of the seat in both front and back rows. “The front row wasn’t bad, but at 5 foot 11 inch tall,” he says, “my knees were firmly planted against the seat back for the entire time in the rear row.” He claims that the saddle itself “didn’t seem to be bad.” The director general of Aviointeriors had an explanation for the saddle-style design decision back in 2010, pointing out to USA Today that, “cowboys ride eight hours on their horses during the day and still feel comfortable in the saddle.” True, though cowboys also enjoy total freedom of movement on a horse, and are not tightly sandwiched between other cowboys and their flatulence. Also, have you ever played The Oregon Trail? But I digress.

So how far are we from seeing the Skyrider 2.0 on real airplanes? Companies have been talking about these “high-capacity seats” for a while, but at this point, no airlines have announced plans to install this particular solution, though Aviointeriors says interest is “really strong.” If airlines truly believe that are willing to trade their suffering on an airborne inquisitorial torture device for a major airfare discount, it’s just a matter of time.

Have your news read on MSCNewsWire

More in this category: « Map showing travel time to nearest city with at least 50 K residents World’s biggest plane set to fly in coming months »
back to top
Apr 09, 2018